Tales of Afton Past

The 90-minute DVD that Betty gave me yesterday will haunt me for a long, long time. I don't know exactly why a town that I've never lived in, and actually have only known intimately for about 10 years, evokes such fascination and sentimentality in me. Perhaps it's because everything about the town presages it's eventual demise. Although I realize that to everything there is a time and a purpose, the loss of a town -- a whole town! -- seems to be an unspeakable tragedy. For a while, I thought I was the only person in town who "got" that, but now I realize that I was foolish to be so presumptuous.

The DVD opens with Tom Bassett, now deceased (2nd of three generations of grocery store proprietors) leading a "tour" of Afton, pointing out all the existing buildings and explaining the changes and the tear-downs and showing where buildings once were that are no more. This seems to have been filmed in the late '70s or early '80s. Following that, there are numerous interviews with citizens of Afton who were obviously chosen for their longevity and their knowledge of the town as it was in the early part of the 20th century. If there was ever an argument for taking oral histories from our senior citizens, this is it. The citizens are articulate and have amazing memories, often in great detail. 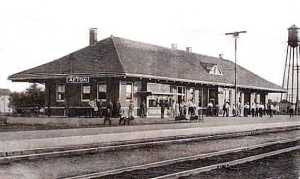 Although I was quite emotional while I watched the DVD, I managed to jot down a few things that I felt were important, or interesting, or just amusing. From what was said, most of the people interviewed were born between 1905 and 1912, so many of the recollections were pre-Route 66 days. There were numerous references to how busy and vital Afton once was, primarily because of the large number of trains that stopped there -- about 20 in a 24-hour period. Many buildings had rooms on their second floors where railroad workers could "flop".

There was talk of several livery stables, and how many people would come in from the country in their buggies. A five-mile trip to Afton to shop was considered a big deal, an all-day excursion. The largest celebration of the year was held on the 4th of July, when people came from all around to party all day and night. 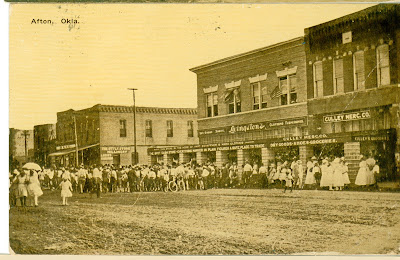 Fourth of July in Afton

Every Saturday night, all the stores remained open until midnight because the "country people" would come in to stock up on necesssities and to eat at one of the numerous cafes in town. 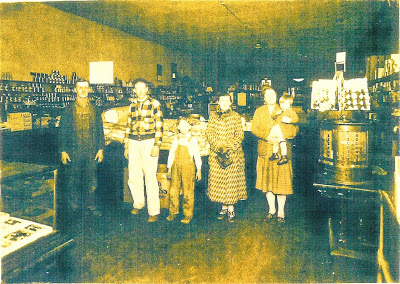 One woman told of coming to Afton from the country when she was very young and finding the granite pillar in front of the bank to be the most beautiful thing she'd ever seen. 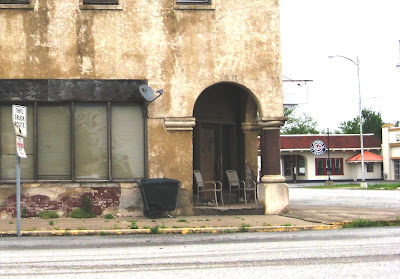 One extraordinary fact that surprised me was reference to the "town pump" which stood in the middle of the intersection of "66 and Main". Wow, that blew me away!

Around election time, the men of Afton (but not the women, since they couldn't vote) would gather in town and many fights would break out between the opposing factions. One woman described Afton as a "shoot 'em up" town. Another described it as the "hay center of the world", which might be a bit of hyperbole, but I'm sure that at the time the citizens believed it.

There was only one black family in town, and the gentleman whose name was Uncle Joe was in charge of uprighting the outhouses which were frequently tipped over by exuberant teen age boys.

There was oh, so much more that I can relate here. If there's a way I can post the entire CD, I will do that. In the meantime, I must say that one woman said "I can't think of this becoming a ghost town", and another said "There's just no town pride any more." I'm afraid that, sadly, I must agree.

On a different note, I noticed when passing the Blue Whale yesterday on my way home from Afton, that he was encased in a frozen pond. I couldn't stop to take a photo because of a car riding my back bumper. Fortunately, however, Brad Nickson (who is a great photographer) went out there this morning and took this picture of the frozen fishie. Thanks, Brad! 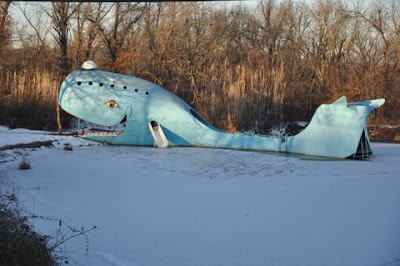 So sad about Afton slowly drying up. Sometimes I wonder why some people never realize what's being lost.

Laurel, I also can not understand my interest in the town of Afton, OK. Running the road from the Kansas state line to Amboy, CA. this past fall the only other town that took me with complete interest was Glenrio, TX. - NM.

As I have stated to you, I HAD or may still have an interest in rebuilding an old gas station on the Mother Road... BUT a person must have the support of the town Fathers - plus the People of the town...

It sounds as if Afton maybe on the same track as Glenrio. How sad !!

My local paper put out a series of "Remembered" books for my town and other towns in the area. It saddens me to see how vibrant the downtown area was years ago, and to see that energy gone now. Seeing cities like Detroit and Gary becoming urban wastelands shows that it's not limited to small towns. It's always sad to see.

I wish not agree on it. I assume polite post. Specially the appellation attracted me to study the whole story.