Tulsa A to Z 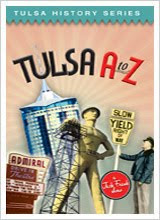 This might appeal to anyone who's planning to visit Tulsa on a Route 66 trip, and it would be particularly interesting to Tulsa residents. A film maker named Jack Frank, who has done several documentary-style films about the city of Tulsa, has just released another one called "Tulsa A to Z". It spotlights various entities, both present and historic, of interest in the city. Because of it's ties to the early oil industry, and because it was once called "The Most Beautiful City in America" due to its oil wealth, Tulsa is an extremely appealing city with a particularly interesting history. Jack Frank is good at finding unique gems in the city and presenting them simply and often with great humor. Route 66 is featured in a number of the segments, the Meadow Gold sign and the Cyrus Avery Bridge to name two. I'm in the movie, too! Yes, for about a half second, Ron M. and I can be seen in the FAR background at the Meadow Gold sign dedication ceremony. Friends Brad Nickson, Michael Wallis, and Dennis Whitacre actually have speaking parts. It's a fun movie, and a short "preview" can be seen at http://www.tulsafilms.com/ , where it can also be ordered.

More from Afton Station tomorrow!
Posted by Laurel at 5:12 PM

There are other trailers of Jack Frank films at that site. Just click on "order" and you can preview them. The one on Art Deco is great!