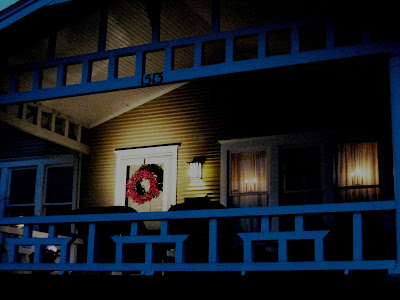 Believe me, the trim on my house is NOT blue! I took this photo this morning as I was backing out of the driveway. It was still dark, there were no blue lights shining on the house, I wasn't using a flash, and I wasn't taking it out of a window, so I have no idea why the white woodwork turned out to be blue. Anyway, what you see is the extent of my Christmas decor for this year.


I chose not to go to Afton Station today, so if there's anyone reading this who showed up there and didn't find me, I do apologize. I have way too much to do here at home this weekend. I've been futzing around the house today, getting things ready for Christmas, getting gifts and food ready to take to a party tomorrow evening, and thinking a lot about Bob Waldmire the whole time. There have been some beautiful tributes to him this week, and some impressive articles in equally impressive newspapers such as the Chicago Tribune and Chicago Sun-Times. There was also a feature about him on CNN News. Everyone, including me, claims to have been his friend. And everyone is right. Bob truly WAS a friend to everyone he ever met. There are some great "Bob stories" at http://tinyurl.com/yet8df2.


I don't believe I've posted this photo here before (probably because it's such a hideous picture of me) but it's been going around the net a bit lately, so I might as well own up to it. This was taken at the 2008 Route 66 Festival in Litchfield, IL. Bob and I were discussing the fact that he was all out of the chili seasoning he makes and which my daughter loves so much. He rummaged through his entire VW bus to try to find one last jar of it, but to no avail. He was going to make another batch, he said, but that never happened. 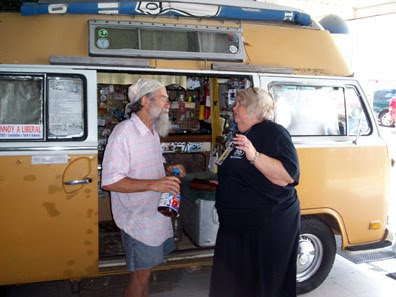 Thank goodness, after Monday the days will start to get longer again. I really don't like these winter days of less and less time between sunrise and sunset. I'm thankful, however, that I live in Oklahoma and not in the path of that big snowstorm that buried the East Coast last night. It's gray, dingy, and cool here, but dry and not unpleasant.
Posted by Laurel at 2:42 PM

We are going minimal here on the decorations as well, it just took me 10 minutes, including digging the few items out of the basement bins :o)

I had some good intentions about decorating this year, but I don't think my beloved aluminum Christmas tree would survive long with a seven-month-old, shiny-object-obsessed kitten in the house....