I doubt it happens very often that a person goes to the post office a couple of days before Christmas and has anything but a long, tense wait among impatient people which results in a less-than-pleasant experience. I, on the other hand, experienced something during my trip to the Afton post office today that was not only pleasant, but moving and beautiful.

I had a package to send to my son-in-law. It was late because it was mailed to me from Canada (or I guess that's the reason, since I ordered it about a month ago). There's nothing like using a post office in a "almost"ghost town to cut down on waiting time. In fact, I was the only one there when I walked in. The postmaster was helping me change packing boxes, since I accidentally put the gift in an Express box rather than Priority box, when a couple walked in. By their look and speech patterns, it was easy to tell that both the man and the woman were mentally challenged and had physical problems as well. They approached the postmaster and the man said, sheepishly, "May I borrow $20?". The postmaster instantly pulled a $20 bill out of his wallet and handed it to the man. "You realize", he said, "that 'borrow' means you must repay me." Then he broke out in a big smile and added, "But in this case, this money is a Christmas present to you, and I do not want it back. Merry Christmas!"
At this point, I broke out in tears. I tend to get awfully mushy at such times. I'm glad nobody else was in there to see my mushy side! The man shook the postmaster's hand and said "Thank you, thank you, thank you!" The woman kissed the postmaster, right over the counter. It was so beautiful! After the people left, the postmaster told me that there were many places he could have spent that $20, but he knew those folks and knew that they were very poor and often unable to pay for even the basics of life. My only regret that I wasn't more on the ball, or I would have added another $20 to the gift. It just happened so fast. That postmaster is an angel!
Meanwhile, we had a lovely 90 minutes at cold Afton Station today. I drove to Afton, and Ron M. came up with me, to meet with both Betty and Tattoo Man. Tattoo Man had a nice article published about him in American Road Magazine this month. I receive my copies of the magazine early since I'm a retail vendor, so Tattoo hadn't seen it yet. I wanted to give him a couple of issues so he didn't have to wait until his arrived. Also, Betty and I needed to exchange Christmas gifts, since we won't see one another again until after Christmas.
Here's a picture of Betty and her date. Oh, by the way, it was the fruit kind. Ron brought them to her, and they're from the Shield's in Indio, California. Betty says that dates from a tree are really the only kind she's interested in these days. 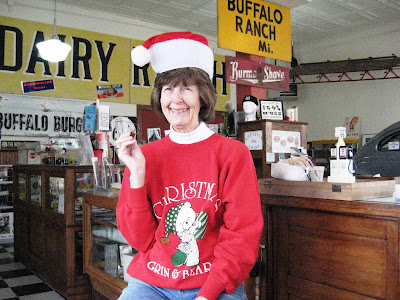 While Betty and I were exchanging gifts, Ron dressed Tripper for Christmas. 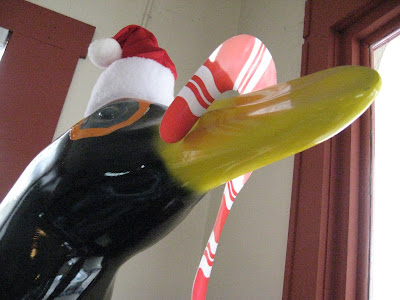 There were no visitors while we were there, so we drove back to Tulsa. The clouds are getting thicker by the minute, which I'm afraid presages some precipitation in the next couple of days. Snow on Christmas in Tulsa? It's a possibility!
Posted by Laurel at 3:11 PM

Great episode at the post office, does'nt make you all tingly :o)

Hebrews 13
1Let brotherly love continue.
2Be not forgetful to entertain strangers: for thereby some have entertained angels unawares.

2 Corinthians 9:7 Every man according as he purposeth in his heart, so let him give; not grudgingly, or of necessity: for God loveth a cheerful giver.


God will reward that postmaster.

Have a Blessed Christmas and a Blessed New Year, Laurel.

With everything so negative these days the episode you experienced at the post office helps you to rejuvenate your faith in mankind and that there are still truly kind people in this world. Give my Christmas wishes to your postmaster.

What a lovely episode...the true spirit of Christmas.Please thank your Postmaster,Laurel, for his humanity.