How I Spent My Winter Vacation

I had another "day off" from Afton Station today and did some fun things. After breakfast this morning, I had some time before the store I wanted to visit was open, so I drove around my own neighborhood. Have I told you how much I adore my neighborhood? It's Tulsa's historic district, just a few blocks from Route 66 and close to downtown, and it consists of amazing huge homes built by the oil barons of the early 20th century, smaller interesting homes built by a variety of well-known architects, and lots of even smaller, circa-1915 craftsman bungalows. My modest house is in the latter category. All the following pictures were taken within a few blocks of my house. 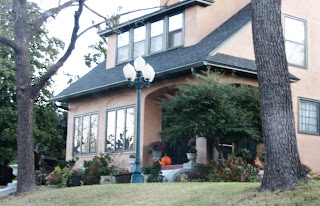 This is the "famous" house on my street, once the home of Cyrus Avery, the Father of Route 66 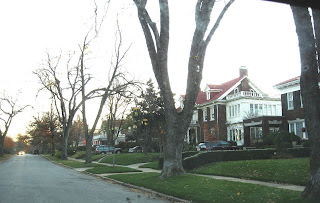 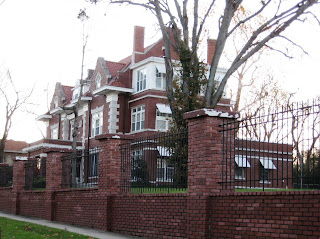 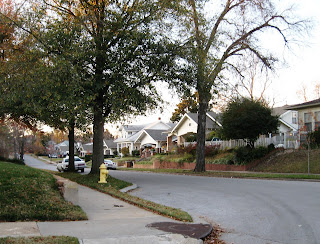 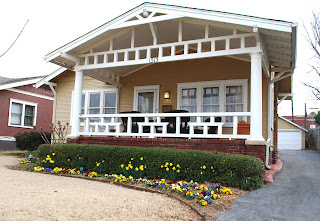 I did my shopping, then called Ron M. to see if he'd like to do a little Route 66 exploring, this time west of Tulsa for a change. I picked him up and we didn't get very far before we stopped at Ollie's Station for lunch. I've mentioned Ollie's before, but had never taken photos of the inside. Here are a few Ron and I snapped. The theme, obviously, is railroading, since it's right beside the railroad tracks. Inside there are lots of model trains, all operating and click-clacking overhead. It's fun, especially for kids, but can get pretty noisy at times. Ollie's is a longstanding member of the OK Route 66 Association. olliesstation / Home Page 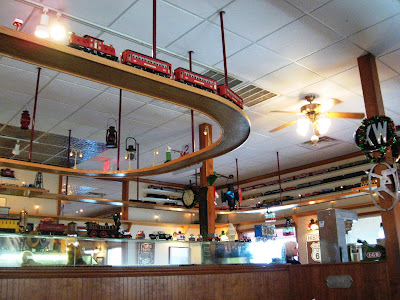 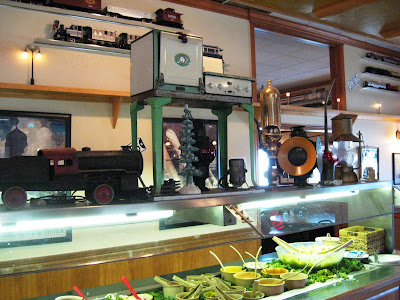 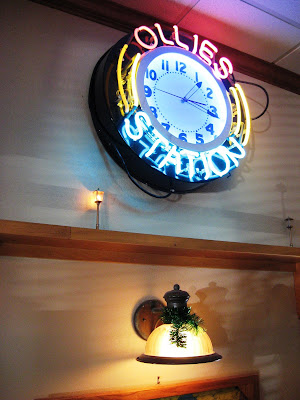 After lunch, we got off-track ourselves when, heading for Sapulpa on 66, we decided to take a road that led to the charmingly-named town of Pretty Water. The road went for miles, then turned to gravel and continued for many more miles. We were no longer on Route 66, but we were enjoying seeing something we'd never seen before. The countryside was a mix of farms, dissheveled trailer homes, and newer construction on small horse farms. We ended up somewhere near Keystone Lake, but I'm still not exactly sure where we were. It was so unfamiliar that it honestly felt like a little vacation for me. But all good things must come to an end, and eventually our pretty little road hooked back into a major road that was familiar to Ron, so we took it back to Tulsa. It was a delightful way to spend a day!
Posted by Laurel at 4:09 PM

Your porch looks awesome. Ollies looks like a neat place too :o)

What beautiful homes! I love the bungalows, and your house is lovely!

If you like old, historic stuctures, then you'd just LOVE a visit to Guthrie someday. If you do, then don't miss the Scottish Rite Temple. It's open for tours, and they have the actual pen President Roosevelt used to admit Oklahoma as a state on display.

I've been to Guthrie and I've seen the beautiful buildings. Unfortunately, I haven't been able to spend much time there, but some day I'd like to take a whole weekend there. Great town!