.... we had visitors at Afton Station! On the way to Afton (Ron M. was with me) I had one of those unquenchable urges to drive right past the Station and take a ride somewhere. It was a beautiful, clear day, not to be wasted in a dusty old gas station with no visitors. Ron went along with the idea, since he's been wanting to see the new casino up on the OK/KS border, so we stopped briefly at Afton Station to put up a "Back Soon" sign (although at the time we had no idea how soon "Soon" would be) and off we went. We had a nice drive on some hitherto unexplored and very lovely country roads, and actually discovered that there are quite a few new casinos on the Oklahoma side of the state line. We were in three states in our little 2-hour ride, because we also crossed the border into Missouri at one point. We didn't go into any of the casinos (I hate casinos!!!), but we checked them out from the exterior. We also explored the little town of Welch, Oklahoma where we liked the folksiness of this sign: When we got the wanderlust out of our systems, we headed back to Afton feeling a little guilty for having dissed anybody who may have come while we were gone. But we were back by just a little after 12 noon so it wasn't too bad, and there was no evidence of anyone having been there.

We sat around for a while, cleaned out the refrigerator, ate our "picnic" lunch, assembled the new easel my daughter gave me for Christmas, and complained about having no visitors. Discouraged, at about 2:40 I suggested we start closing up for the day. I must have said the magic words, because immediately two cars pulled into the parking lot at once! Yippee! Visitors!

One car contained a local mother with her son who was visiting from Norman OK. He was a super car guy, and had lots of comments and questions about the Packards. I love it when that happens. The other car held a family, also from Norman (by coincidence), consisting of mom, dad, and little 3-year-old David, who had been nagging them to take him to "the place where Lightning McQueen drove" in the movie "Cars". Y'know, that movie has brought a lot of visitors to Route 66, and those of us who are preservationists and business people are so thrilled by the interest it's generated. Although little David was camera shy, I managed to get a lovely picture of the back of his head.

The bonus of this whole thing -- second only to being able to greet some travelers after such a long, dry month -- was that the family purchased $40 worth of Route 66 merchandise, so my bottom line wasn't "0" for the month of December, which is where it was heading before today.

OK, here's the proof (for those who tend toward doubtfulness) that we had visitors today. Yep, real, warm-blooded, living, breathing PEOPLE! 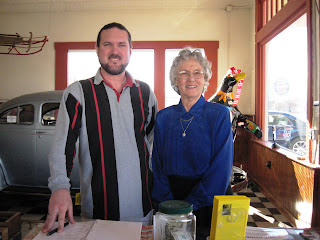 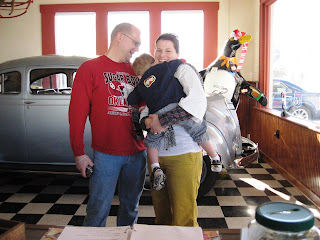 ALSO: I wanted to mention that although I wasn't at Afton Station yesterday, Ron "Tattoo Man" Jones was kind enough to open for me and play host to my very dear friend Pat Bremer and his father, who were passing by on their way home to Indy from a Christmas trip to Amarillo. I'm SO sorry I missed them, but I'm glad Pat's dad was able to see the Station and the cars.

I'm so glad you had some visitors today, and it sounds like they were gems!

Glad you had visitors and a sale. Does not always pay to play hooky :o)

So you hate casinos too, huh. There are close to 10 of them surrounding the Phoenix area, some here for close to 20 years, and I have yet to set foot in any of them. After living in Las Vegas and having gambling coming at you from all directions I got TOTALLY burned out on the whole casino thing. Have a happy!