Since my fruitcake posting attracted several interesting responses, I did some research. My friend Kat told me that her grandmother made Boiled Fruitcake. This sounded pretty weird, but since Kat is from Australia, where they actually eat Vegemite (LOL), I decided that she was probably serious. :-) And she certainly was! Here's the recipe, and it sounds very, very good to me. I was picturing it being boiled after the flour was already in the mixture, but this is of course not the case. Thanks, Kat..... I'll try it next year!

1/2 lb. butter1 1/2 c. brown sugar1 1/2 lb. mixed dried fruit (approx. 4 1/2 c.) : raisins, currants, peaches, etc. I also add maraschino cherries, 1 tsp. cinnamon, 1 tsp. cloves, 1 tsp. nutmeg, 1 c. water, 1/2 c. sherry, more for moistness, 3 beaten eggs, 1 tbsp. orange rind, 2 tbsp. golden syrup, 2 c. self-rising flour, 1 c. plain flour
Mix first 8 ingredients in a saucepan. Bring slowly to a boil, stirring often. Allow to cool. Add eggs, orange rind and syrup. Fold in flour and mix well.
Place in a 9 inch square pan lined with brown paper. Bake at 350 degrees for 1 1/2 hours. This cake is more moist if kept in an airtight container a week or more before serving.
Well, I'm about to venture out to mail a package off to my daughter and son-in-law in Chicago. I'm a little late this year, but some of the items I've ordered for them haven't arrived here yet. I guess I'll just have to accept that some of their gifts will perhaps get to them after Christmas. :-(
Here they are... 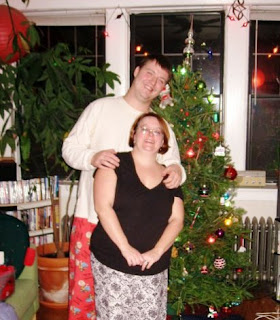 Mm, that actually DOES sound good!

I do confess, your title grabbed me I'm a Rte 66 aged hippie outcast radical and you know the words to "Kansas City" so I thought I'd just...get my kicks.