Yeah, that's exactly what we had yesterday. What could be better than a barbecue buffet with a group of friends, followed by a small-town parade, followed by a drive through a city park's "light show" (relying heavily on inflatables), followed by coffee and dessert at a warm local spot? Add a huge helping of inspired hysterical laughter (to be explained later). My only regret about last night's outing is that my procrastination in the matter of learning about how my relatively new camera really works caused my photos of the parade to be less than spectacular.

There were about 23 of us who participated in the Oklahoma Route 66 Association Christmas outing. As I've mentioned before, I was named a last-minute "leader" of the group, but I cleverly managed to foist that job off on several other people during the course of the evening, claiming incompetence to lead the caravan through dark and somewhat unfamiliar streets (despite the fact that I did a "dry run" earlier in the day... heh heh). So, I became just another follower, which is exactly where I wanted to be. :-)
I picked up LaSandra, the wife of Brad, who was supposed to be the leader of the group until he was called out of town for a death in his family. We then picked up Ron and headed for Sapulpa. We started on Route 66 at the Hickory House Barbecue, which has a very delicious buffet. I particularly liked the ribs, but I didn't taste a lot of the other stuff, so there may have been other yummies, too. 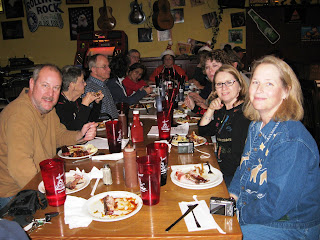 The City of Sapulpa Christmas Parade started not far from the restaurant, and one of our Association members who has a business in Sapulpa was able to secure us parking places behind his store, so we had good viewing spots for what was one of the longest and nicest small-town parades I've ever seen. They said it was 2 miles long, and I totally believe that. Every organization, church, club, and business in town had a float, I think. And Sapulpa must be a haven of beauty, because there had to be at least a dozen beauty queens riding in various vehicles, including one who was driving her own tractor! Damn, I'm SO upset about not having decent pictures of the parade! 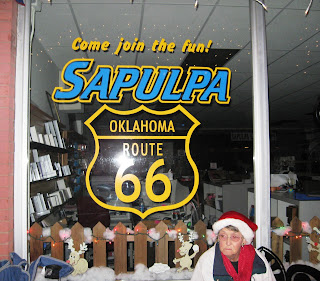 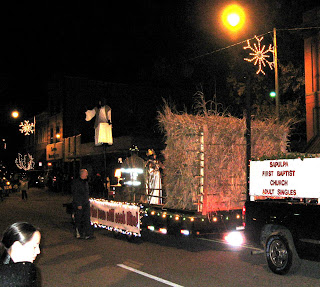 After the parade, we wended our way back to Tulsa's Chandler Park, a huge city park which puts on a drive-thru light show each Christmas. It was on this leg of the trip that we decided to call Brad in Texas and tell him what we were seeing, since he was unable to be with us. This turned out to be such a great idea that Brad set up a conference call, and by the time we arrived at the park we had three of the cars in the caravan voice-connected such that we could exchange commentary with one another while describing every little detail of the light show to Brad in Texas. The bluetooth in my car allowed everyone in the car to share in the conversation, which became hilarious to the point that at times I was laughing/crying almost too much to keep the car on the road! Fun! The light show consisted of mainly inflatables.... hundreds of them.... and lights wrapped around the bottom 5 feet of just about every tree trunk in the park, but the view from the top of the hill, overlooking all the lights of Tulsa, was quite spectacular.

By this time, we'd all pretty much decided to forget the trip all the way across town to the Rhema Bible Church light show. It was getting late, and a lot of the people had well over 100 miles to drive home. So, we headed for downtown Tulsa to Baxter's Interurban Restaurant, which is great for dinner and even more well-known for it's after-hours desserts, exotic coffees, and cocktails, of which we partook. I just had coffee, but the desserts looked absolutely luscious! 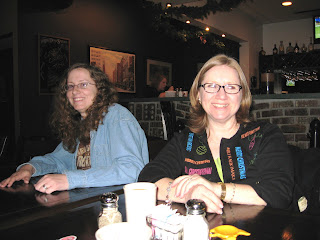 After that, I just dropped my passengers off at their homes, then came home myself and crashed.
I expect to post more photos later, so come back this evening. For now, I'm in a hurry to get to Afton Station, so I've just posted a few that didn't require any cropping or fixing. Stay tuned.....

Glad you had a fun evening. I am not a big fan of the inflatable decorations, I always wish to pop them when I drive by :o)

Sounds like a great time! Are we going to hear what induced hysterical laughter in you? ;)

I'm chuckling at my hubby's comment. We laugh about the inflatable decorations, because I always have the urge to pop them with a BB gun and watch them deflate. LOL I don't know what it is about them, but I think the light displays are so much prettier!