I'm glad I have a few more pictures from yesterday to post, because certainly nothing worthy of a photo occurred at Afton Station today. I'm having trouble accepting this and I'm sure you're all tired of hearing it, but I've just got to face the facts. Tourist season is over.... OVER, OVER! So get a clue, Laurel!

We had one visitor today, and he was a local guy who drops in occasionally, so I didn't get to tell him anything, show him anything, or sell him anything. We had a nice chat, however. David and his 3-year-old son Patrick also dropped in on their way to a shopping spree, Betty came in after church and stayed for a while, and Ron was there with me as well, so we weren't really too bored, just a little discouraged. We made some popcorn, studied my camera instruction manual for a while, and watched a neighbor move around a lot of large crates with his fork lift. He just kept moving them back and forth from one storage building to another. Looks like he was even more bored than we were!
On the way home, we stopped at the Chelsea Motor Inn to drop something off, and we had a very nice chat with Frank, the owner. He is SUCH a good roadie, and his little motel is just about the neatest lodging on the Route 66. He told us that just after Halloween, his wife Trudy was feeding their pet bison (which they keep in the back yard of the motel, fenced of course) when she slipped and fell, whereupon the bison gored her squarely in the butt! We're not talking a little nick, but a 3-inch deep wound! She managed to drive herself to the hospital, where she got a bunch of stitches, both inside and out. Frank's description of Trudy trying to explain to the triage nurse that she had been gored by a buffalo in her back yard was the funniest thing ever. She had to repeat it three times before the nurse could process the information. What a hoot!
Anyway, here are some more pics from yesterday's big doings at the parade. I managed to lighten up a few more parade photos so you can barely see what we saw while we were there. Enjoy..... 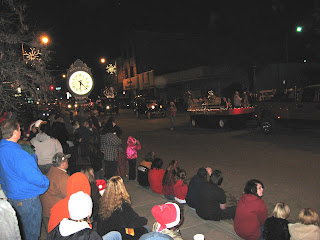 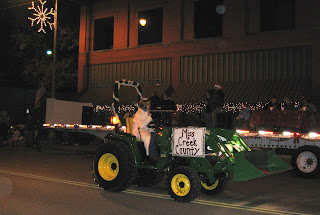 Miss Creek County drove a tractor in the parade 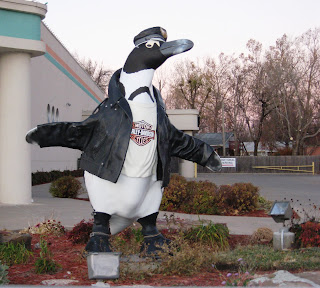 I took this pic this morning. This is Tripper's cousin who works at a local Harley-Davidson dealership.
Posted by Laurel at 4:54 PM

Sorry it is slow :o(

I will let Beth comment on the penguin picture :o)

Ha ha! I just read Ken's comment. Of course, that was the first thing I was going to remark about! LOL Tripper has one cool cousin!

We'll keep the Chelsea in mind, although who knows where we'll end up stopping for the night when we take our trip. As long as I can get an idea of which motels are clean and well-cared for, I hope we'll have multiple options. I'm sure looking forward to sleeping in a teepee at some point, though!