I'm determined to keep this a primarily Route 66 blog, even though not much is happening in my life that relates to Route 66 right now. I'm deeply into Christmas preparations, which I guess is as it should be, but I don't want to forget the Mother Road as I run from place to place shopping for food, wrapping gifts, and all the usual holiday madness.

As I sit in my office at my computer, there's a very large bin of unsorted photographs at my feet. They're ... you know... the old-fashioned kind actually printed on photo paper, not digitally imprinted in cyberspace. This is my "some day" box. Some day, when I have time, I must go through all these old photos and get them in some sort of order. They range from pictures of old Route 66 trips, to photos of our Connecticut house being built, to pics of my daughter (who is now 35 years old) in various stages of childhood, etc. I'm convinced that everyone except the most anal-retentive organization freak has a box like this lying around somewhere.
Today, I decided to reach into the box and pull out some Route 66 photos, absolutely randomly, to present here. I just closed my eyes and grabbed two pictures. I think I did a pretty good job of grabbing. Here they are. 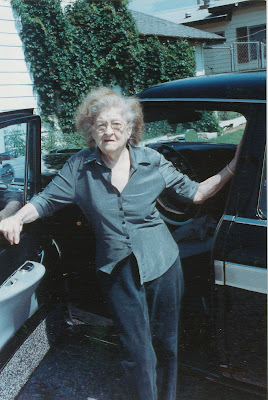 Here's the wonderful iconic Lucille Hamons of Lucille's, on Route 66 in Hydro, Oklahoma. It was taken in August 2000, a few weeks before her death. Lucille ran a gas station and small motel serving Route 66 from World War II until her death. The legends of Lucille are too numerous to mention here, but there's a good article about her life and legend at http://everything2.com/index.pl?node_id=1515510. I feel fortunate to have met Lucille three times. In this photo, despite being quite ill, she wanted to come outside to have her picture taken with our 1957 Packard Clipper. 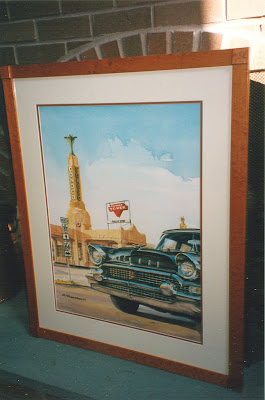 Next, here's a photo of the first painting we commissioned from the wonderful Route 66 artist and historian, Jerry McClanahan. It shows the same '57 Packard Clipper as above, parked in front of the U Drop Inn/Conoco Station in Shamrock, Texas. The picture hangs in my guest room now, and I wish everyone could see it in person. I frankly think it's one of the best he's ever done. We went on to commission three more car portraits from him, but this will always be my favorite. McJerry66

Thanks for the photo of Lucille Hammons, the Mother Of The Mother Road. Ya know, I've never actually seen a picture of her.

Finally, a Blessed Christmas and a Blessed New Year to you,Laurel.

I've read several accounts of Lucille, and it sounds like she was a remarkable and tough woman. Thanks for including her picture of her. I love the painting, too. Beautiful!

I had dozens of packets of photos stacked on the bookshelves downstairs, and a while back, I went through them and put them in photo storage boxes. Those are the best! You can separate them into various events or trips, and it's so much easier to put them in boxes rather than in photo albums! I've got two filled so far, with a third one started--and more pictures to put in. Actually, that would be a good project this winter!

I love the old family photos I have, but I have to say the ease of digital has been wonderful. When we went on our cruise in 2007, I made a book of pictures online and had it printed. I love it, and that's what I'll do for our Route 66 trip.

Have a wonderful Christmas, Laurel!