On my foggy drive to Afton this morning, it was too early to listen to my two favorite NPR shows, "Car Talk" and "Wait, Wait Don't Tell Me", and since I don't like music, while flipping channels I landed on yet another political diatribe on some unidentified Sirius channel.  I was raised by parents who believed that it was just as bad to reveal one's political affiliations as it was to reveal one's salary, so I can't get used to the constant political talk among my friends, acquaintances, and pundits on the TV and radio.  This endless presidential campaign is slowly chipping away at my usually rosy outlook on life.   A few months ago, I remember telling someone that I was in some ways enjoying the excitement of it.  Not any more.  The negative campaign ads are going to make me completely crazy before the next six weeks have passed.  We just need to get back to loving and RESPECTING one another!

But enough about that.  My Afton Station day was quiet and non-political.  Ron "Tattoo Man" Jones helped out all day.  He came bearing his newest tattoo, acquired yesterday.  It's the Whiting Brothers sign, right on the inside bend of his elbow.  It looks like it would have hurt that sensitive area, but he said it wasn't a problem.  Here it is.  (Note the Afton Station tattoo just above it). 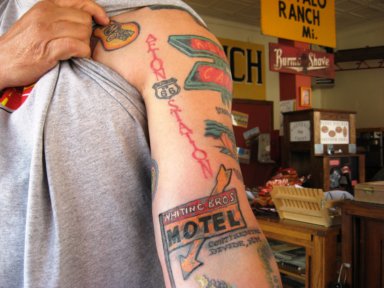 It was Tattoo Man's birthday last week, so I presented him with a pecan pie today.  It's his favorite food, and it was the best I could come up with for a gift.  I believe he appreciated it.  Hope he doesn't eat it all in one sitting!

We had only 12 visitors, but it was a nice mix of people who enjoyed sharing their stories and listening to ours.  The fellow who came two weeks ago with the gorgeous white Corvette convertible came back on his returrn trip to California from the 50th Anniversary of Corvette celebration in Kentucky.  It was pretty neat that he chose to return and say hi!

Other visitors hailed from California, Texas, Bartlesville OK, New Zealand, and New Jersey.   The folks from New Jersey were taking photos of each other with Tripper, so I snapped one of both of them.  Tripper posed majestically, as usual.  No such thing as a bad picture of Tripper.  The couple is in the process of moving from NJ to Arizona, and decided to make the trip on Route 66.  Good plan! 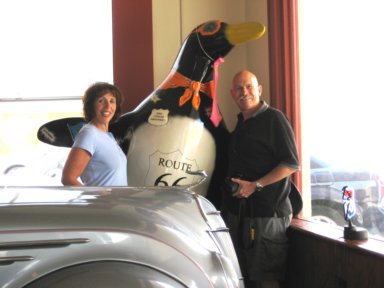 The gentleman from Bartlesville was just out for a spin on his motorcycle and had never thought much about Route 66, but by the time he left the Station he had purchased three Route 66 books and was getting very enthusiastic about taking a tour of the whole Route in Oklahoma soon.  Apparently Tattoo Man and I are good at dispensing Mother Road propaganda.

The New Zealand couple had purchased a vintage car on AutoTrader.com before they got to the States and picked it up when they got here.  (Oops, can't remember what it was except that it was an 80s convertible muscle car) They plan to ship it back after their Chicago-to-LA trip, where it will join their vintage Corvette.

I forgot to mention yesterday that Ron M. and I took a ride on the Afton portion of the 9-foot highway to check out the reports we'd heard that a small portion of it had been asphalted last week.  We were of course horrified by the news, but our investigation revealed that the damage isn't too bad.  It's just the first 500 yds. or so, at the very end where it meets the modern road.  They shouldn't have done it, but it certainly could have been worse.  You turn your back for a minute and something like this happens.  I feel a little responsible, since it happened "on my watch", as I'm one of the only ones in Afton who seems to care much about preservation.  I don't know if I'd been able to stop it, but I could have tried.

I'm definitely really into this year's election...I don't like the negativity, either, but to me, the whole process is pretty fascinating and exciting! And very important this year!

As a collector of penguin figurines, I'm looking forward to getting my picture taken with Tripper. :)

What a shame about them asphalting the original road...but it happens often, and you shouldn't feel responsible!