This one will be short!

It's pretty late for me to start blogging, but I just got home.  After a totally exhausting day, I went to a small dinner party at a friend's home.  My Afton day was one of the most mentally tiring because it seems like every guest who walked through the door had a story to tell, most of them very interesting but very long.  And the people just kept coming all day, to the point where we didn't even have time to sit down and eat a little lunch.  Thank goodness Ron M. was with me today to help with crowd control.   (Actually, there weren't crowds.... it just seemed that way.  Twenty-seven guests altogether, I think).  As a result of all of this, I'll save any details for my journal entry tomorrow.  Meanwhile, here are a couple of pictures from late in the afternoon, when Andie and Holly arrived.  They're also known as the 2Chicks, and they're doing as much of Route 66 as they can in the next couple of weeks.  F2 Chicks » See the World  A guy named James from Alabama was also there, and all were happy to pose for a picture.  The third guy in that second picture (the one in the pointy red hat) is Clive, who is traveling with Andie and Holly and posing for pictures whenever they stop. 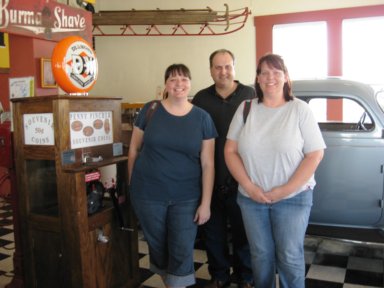 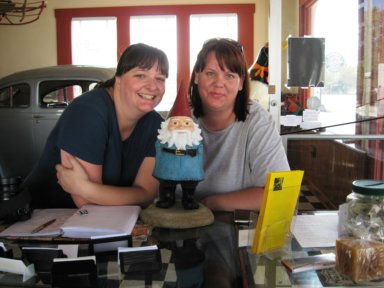 I never thought about it, but I bet hearing each traveler's story DOES get a little exhausting! What is exciting and new to each person is something you've probably heard before. Not that you don't enjoy meeting the people and hearing their stories--it's obvious that you do--but I can see that if you were already tired, it might be even more exhausting!