Arkansas Travelers and others

Ron and I took it easy driving to Afton this morning, since I don't have posted hours on Thursday and I wasn't expecting my first guests until around 2.   We got there at 11, and I'm glad we weren't any later, since shortly after we got things ready for opening, we  had our first visitors.  They were a really nice family from Minnesota who are building a log cabin on the lake close to us.   Their two teen-age girls were with them, and since they said they'd been in our area for the past two weeks, I asked why the girls weren't in school.  Home schooling!   Duhhh... of course!   I've been trying to decide whether I would have liked home schooling when I was a kid.  On one hand, traveling at any time of year with my parents would have been ultra-awesome, but on the other hand I think I would have missed the comraderie with other kids every day in the school environment.   I can't decide.  Anyway, the family will be in our area for another week, and might come back for another visit, and I'm very happy about that.

While they were there, the car club from Russellville, Arkansas arrived.   It was this group's visit that was the reason I opened on a Thursday, my regular day off.  Ten cars and 17 people!    They had quite a array of neat old cars, but because a truck had parked and blocked much of the access to my parking area (grrrr!!!!) some had to park across the street.  Therefore, photos aren't very good. 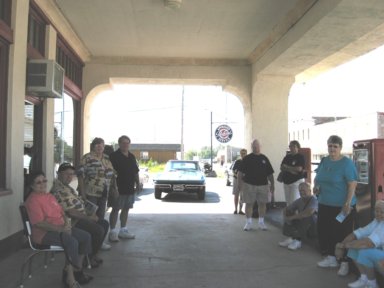 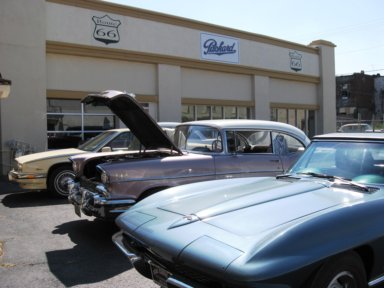 The next pic is of Thomas, a visitor from Germany who arrived while the car club was still there.  He's bicycling solo across Route 66.   As  you can see, he has a full load on that bike.  I can't imagine how he keeps it upright! Wow, impressive feat!   We passed him on our way home about 8 miles outside of Afton headed west, and he was chugging along at a good pace.  (You can see some of the cars belonging to the car club parked across the street.) 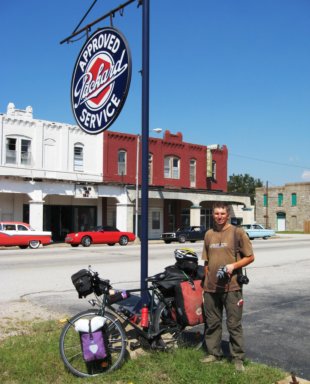 But that's not all!   Other visitors included two guys on motorcycles from Ponca City, OK and two middle-aged ladies from Kansas who are doing Route 66 segment-by-segment.   Twenty-six visitors in all.  All this activity made me sad that I can't be in Afton every day of the week.  Look at all the cool people I'm missing!

Sounds like a great day! That's a huge group from Arkansas. Did I see one of the newer T-Birds in the group? Those are so sharp.

I don't think I'd have the fortitude to bike 66...that's hardcore!