Just a few random observations on my ride to and from Afton:

There was very little problem with bugs on my windshield this summer -- until just this week.  Suddenly, a plethora of creatures are losing their lives by splatting right in front of my eyes.   Autumn has really brought out the little guys.  Sorry, bugs.  I'd try to avoid you if I could....

Since I never lived in this growing region until just 6 years ago, I'm not very familiar with sorghum.  I'm surprised that it seems to be at it's peak right now, so late in the season. There are also a lot of soybean fields I watch on my way to Afton Station.  They, too, seem to be getting especially lush right now.  Back in New England, most field crops are nearly gone by late September.

The panhandler I pass at a certain corner every time I drive home from Afton has changed his sign.  The guy obviously has a much better sense of humor than I would have expected.   The hand-lettered sign that usually says "Need food and shelter" today said "Have food and a home/Need beer and Harley parts."  Yes, really!

Now, about my day at the Station.....   It was relatively quiet today, with only 12 visitors.  They all came either early in the morning or just before I was ready to leave, but Betty was there all day to keep me company during the middle of the day and we never run out of things to talk about.   The visitors came from San Jose CA, Missouri, Oregon, Delaware, Toronto, and Indiana, as well as one local guy.

The Indiana visitors were Shawn and Tim, a father and son on motorcycles.  They visited Afton Station in 2004 and although it took me a while to remember them, I eventually did when they reminded me that on that earlier visit they met up at my place with a guy from the Netherlands who was motorcycling Route 66 solo.  They told me they ended up traveling all the way to California with the Dutchman and are still corresponding with him on a regular basis.  It was fun to think that an international friendship was started with a chance meeting at Afton Station.  This year, the father-and-son team is just going as far as Tulsa on 66, then heading for Dallas to pick up some motorcycle parts.    Here they are! 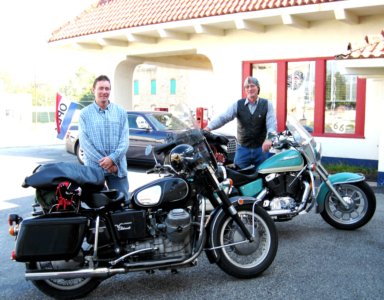 That is VERY cool that they struck up a friendship with the guy from the Netherlands. Hard to believe that the appeal of Route 66--an American highway long decommissioned--is international!

Very funny about the pandhandler--I wonder what his take was for the day?

Hope tomorrow picks up a little bit for you!