One of my readers, Mark, requested a photo of the rare, vintage condom machine that hangs in the restroom at Afton Station.   It was salvaged from the old Buffalo Ranch as it was being razed.  No offense to those condom machine non-appreciators.   :-) 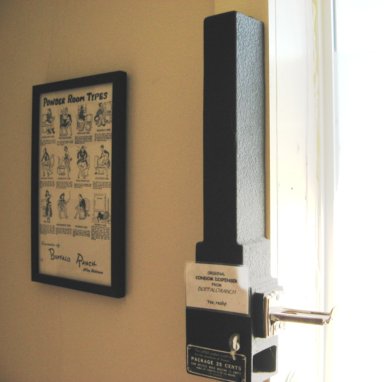 It was an absolutely beautiful day today, cool and bright -- except for the five minutes of pea-soup fog I drove through on the way to Afton.   The fog (caused by the warm steam coming from the industries on the McClelland-Kerr Canal hitting the cold atmosphere) made me think of numerous times I've driven across the Pennsylvania Turnpike very early in the morning.  It's almost always foggy there in the a.m., and I always enjoyed the eerie and somewhat dangerous feeling of driving blind.

The day at Afton Station began early when I raised my new flag, a big white one with a Route 66 shield in black in the middle and small shields representing the 8 states around it.   I think it will encourage people to visit, putting more emphasis on Route 66.  It seemed to work, as I had 16 visitors, which isn't bad for a Tuesday.   My first visitors were from Denmark, followed by guests from Washington State, Caney KS, and North Carolina.  Just as I was leaving, a couple of photographers from Miami came and wanted to take just a few shots of the cars, so I opened up and turned on the lights again.  Since I told them I needed to leave right on time today (to prepare for a dinner guest tonight) they were very courteous about working quickly.   I hate to shoo people out, but these particular guys were very understanding, and since Miami is just down the road, they said they'd be back again soon.

When we first opened Afton Station, there were days when I was so bored and so devoid of visitors that I'd sit and count the trucks that went by, recording the name of the trucking company as well as the geographical origin, if I was able to read it as they sped by.  Today, I came across those lists and it reminded me of how happy I am to  have busy days full of interesting people almost every time I open my doors.

Laurel, it does my heart good to hear that you're getting regular visitors! Believe me, I do my best to "infect" everyone with the Route 66 obsession. LOL

It's surprising how many people find it interesting, but not that many take the time to explore it. Here in Indiana, we're right next door to Illinois, and it wouldn't take that much to head over and check out a bit of 66. Once they try it, they'll be hooked!

Glad it was a good day!

Thanks Beth!  I always appreciate your words of encouragement, and I'm thrilled that you're such a good ambassador for Route 66.  Keep telling your fellow Indiana folks to get on the road and check us out!  We actually have quite a few Hoosiers in our Route 66 email group, so maybe the word is getting out.
Laurel

The flag sounds like a great idea.  Glad it is working so quickly :o)