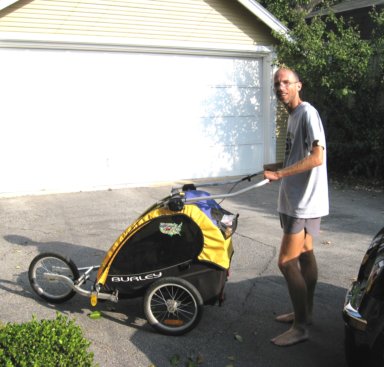 I didn't have time to write yesterday because I spent the day with a most unique and inspirational man.  Phil Rosenstein is running across the country from coast to coast, pushing a baby jogger holding all his necessities.   Yeah, running!  He started in Los Angeles on Aug. 14th and will take Route 66 to Chicago, then go on to Atlantic City, NJ.  He's running for a cause, the Mario Lemieux Cancer Foundation (The Mario Lemieux Foundation), and he'll be stopping briefly in Pittsburgh where he's to be honored by the charity.  He will have put well over 3000 miles behind him when he finishes.  But.... you can read all about him, as well as his daily journal, at the Mario Lemieux site under "Run Phil Run".

The neat thing is that I got the pleasure of his company all day yesterday.  Despite a few friends gasping "You're going to allow a complete stranger to stay overnight in your home?", I felt absolutely no uncertainty after emailing with Phil for the last few weeks. He arrived right after I got home from dialysis, and I'd already stocked up on foods he told me he was craving after days on the road eating mashed potatoes and peanut butter. He took his first shower in a week (since he's been sleeping outdoors by the road in his sleeping bag) while I prepared 2 1/2 pounds of spaghetti with garlic and butter and a gallon of orange juice.  This only began to fill the lithe, 130-lb. guy, so he followed up with a couple of bananas.  He eats about 10,000 calories a day, but hey, he runs 30-40 miles a day!    Anyway, a reporter came in the afternoon to interview him, after which we picked up Ron M. and we went for a BIG steak dinner at my favorite steak joint.  Phil stayed at my house last night, but I had to leave for Afton early this morning so I didn't get to say goodbye.  However, I saw him truckin' along near Verdigris as I was on my way home from Afton.  I honked and waved.  I'll see him again on Thursday when he gets to Afton.

On my way to Afton this morning I stopped in Claremore for breakfast and ran into a friend, Blaine Davis, whose father built the famous Blue Whale in Catoosa.  Blaine lives on the premises now and oversees the Whale and the visitors.  We had breakfast together and exchanged a lot of "traveler tales".

Too much chewing the fat (bacon fat!) with Blaine almost made me late to greet visitors who were scheduled to arrive at the Station at 9:30.  I arrived at 9:25 and they were there 5 minutes later.  Although I was still turning on the lights and fans when they got there, I don't thind they noticed my mini-panic.  The group was a senior men's club from Grove and there were 24 of them.  It was an inquisitive group, and the curious old-timers had a ton of old car questions for me.  I think I answered about 90% of them correctly, and hopefully nobody noticed the fudge factor on the other 10%.

There were 42 visitors today... a huge day!  They were all Americans with the exception of four young Brits in a rented motorhome having a big adventure and a British couple who were participating in the 60-car cross-Route 66 cruise with the British Jaguar Enthusiasts Club. Jaguar Enthusiasts' Club : JEC.  Only one of the 60 cars stopped in, but apparently they were all in a huge hurry to get to Oklahoma City for some reason.  Oh well....

Sounds like a great day, and Phil sounds like a remarkable guy. 30-40 miles a day?! Good grief!

Don't know if you've heard, but AOL Journals is shutting down Oct. 31st. Details are at my journal, as well as Magic Smoke (here's the link):

Ken and I will be moving over to Blogger, and hope you'll join us! Several other J-Landers have already made the move. Email me if you have any questions.

Beth, I'll check your journal for the way to switch to Blogger as soon as I have time.  I'm most eager to see if I can transfer all previous entries to Blogger.  (I've got them all saved.) I'm sure within the next few weeks I'll get it all sorted out, but I'm pretty new at blogging, so I might ask you for some guidance.  And of course please let me know when you make the change to Blogger so I can find you there.   Thanks for the offer of help.  I had just heard about the departure of AOL blogs about an hour before receiving your comment.
Laurel

Now there's a novel way to loose weight. Perhaps my next trip on Route 66 should emulate this!

Thanks for the informative information - I enjoyed reading it! I always enjoy this blog. :) Cheers, vaginalbirthvideo.com