As usual on Friday, I was not able to go to Afton today, but the fort was well held down by David and Marly.   When they last called, they'd had 16 visitors -- Swedes, French, and Americans -- and the day isn't even over for them yet.   And the best part is that they're working on finishing up the gas pumps!   The vintage parts we needed were delivered last week, and Marly has been blasting, buffing, and painting those that needed it.  I can't wait to get up there tomorrow and see the results, although I don't think they'll be completely done by then.

Today's visitors, according to David, included people from California driving a '50s era Packard (I've already forgotten the year.... my memory stinks!)  Also, four Swedish gentlemen were traveling in two Model-As, and maintaining a blog about their trip.  Check it out.  http://www.a-fordresan.se/a-fordresan.se-eng/index.htm .  It looks like an amazing trip and I sure wish I'd been there to meet the guys!

I forgot to mention something that was said to me yesterday which gave me a little thrill, although I'm not entirely sure why.   The visiting family from Minnesota asked me if Radiator Springs, the mythical Route 66 town in the animated movie "Cars", was modeled after Afton!  Since the person who was the Route 66 consultant for the movie is a friend of mine, I know for sure that Radiator Springs was a compilation of many different towns along the Route, not just one.  The visitors said that the first time they came into Afton and then when they saw Afton Station, they were all absolutely certain that they had found the movie town. Oh, how I wish it was true, and that the future of Afton would be as rosy as that of Radiator Springs!  Maybe some day.  In the meantime, it felt good to know that my museum is in a movie town, which of course it isn't... or something like that. 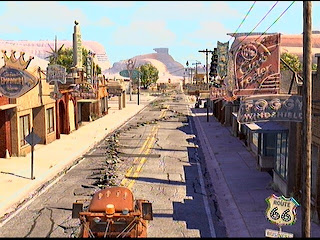 Four boxes of merchandise for the Station have arrived here at my home, so I need to pay some bills and load the car for my trip there tomorrow.

You know, I STILL haven't seen "Cars"? Everyone who knows my love of Route 66 tells me I need to see it, but just haven't gotten around to that yet.

Sounds like a great day--hope you'll take a picture of the gas pumps when they're finished!

Have a great weekend!

I've only seen Cars a couple of times, but I have friends who have seen it dozens of times.  You will LOVE it!   Run -- don't walk -- to your nearest Blockbuster or Netflicks and rent it!   :-)