The morning started out slowly, so I started to write a little essay for this blog about what it's like to be at Afton Station on a morning when it's quiet and there are no visitors.   That will have to wait for another time however, because soon after I picked up the pen and notebook, people started to come in.  Now I'm at home, and this is the first I've had time to write since then.

There were visitors from Belgium, England, N. Carolina, Arkansas, Holland, and Norway, among others.  The travelers from Norway deserve singling out because not only were they on their honeymoon, but they were so cheerful, chatty, well-informed, and oh so visibly in love.  Tone and Frode Rokenes were married on June 21st and have been on an extended U.S. honeymoon from their home in Beisfjord, Norway.   They presented me with a photo of their wedding "getaway" in a cool 1954 Buick, as well as an absolutely breathtaking view of the fjord and mountains from their Norwegian home. 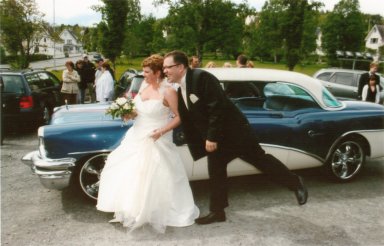 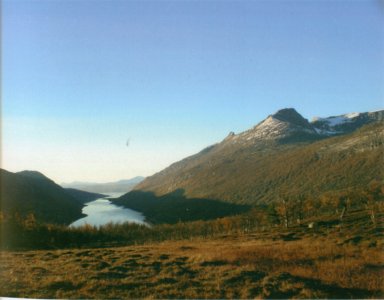 And here they are today at Afton Station. 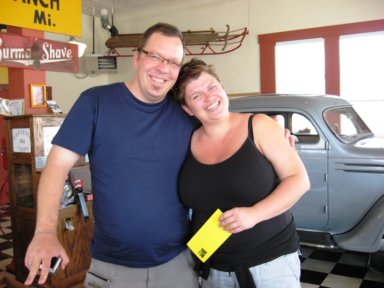 Tone and Frode indicated that one of their favorite U.S. activities thus far was attending the Admiral Twin Drive-In in Tulsa last night.  I have a feeling this couple did a little smoochin' in the back seat while watching Tropic Thunder.  Ah, love....

And speaking of love, I  must give extreme loving praise for Betty Wheatley's home-made taco soup!   She brought me a BIG bowl of it.  I had half for lunch and will have the other half for dinner tonight.   Thank you so much, Betty!  It's so good.   Will you give me your secret recipe???

Laurel, I totally cracked up over the sweet Norwegian couple smooching in the backseat while at the drive-in theater! Now they get why drive-ins are so much fun! LOL

What a great entry and so glad that business picked up for you.  I came to your journal via my wife Beth at Nutwood Junction, and have added you to my alerts :o)