No, I'm not referring to a visiting couple from Germany.  The residue from those two hurricanes rolled into Oklahoma this morning with a real car-washing downpour.  As I drove to Afton, it became blinding between Foyil and Vinita.  I pulled over in a parking lot in Chelsea, but things didn't improve so I pressed on at a reduced speed with both hands firmly on the steering wheel to control hydroplaning in the puddles.  The center of Vinita was moderatly flooded as usual.  They really need to address their drainage issues, I think.  There was also a 140-car train (I counted) that blocked my path for a while.  I arrived at the Station around 9:45 and shortly thereafter the rain started to abate and I was able to put out the OPEN flags.  Today I could keep the door open and the a/c off.  Glorious fresh, cool air!

I had 24 visitors today, making it relatively busy, although I did have an hour in the middle of the day to eat lunch and work up some statistics.  (More about that later.)

A local couple came in with some stories of Afton in the "olden days".   The gentleman's father is 85 years old, has lived in Afton all his life, and loves to tell stories.  He said he'd bring him in soon.  Goody!  Meanwhile, the son did tell me about some bootlegging that went on in my building, when it was the Eagle Service Station, back before liquor was legal in Oklahoma.  Prohibition wasn't over in OK until 1959, kind of late compared to most states.  He also told me that the rock building across the street, which was a livery at the turn of the century, was a stopover for the Dalton gang when they needed something horse-related done.  Those Dalton boys (Dalton Gang - Wikipedia, the free encyclopedia) seem to pop up a lot around these parts, so of course one wonders how many of the stories bear the earmarks of truth rather than legend. 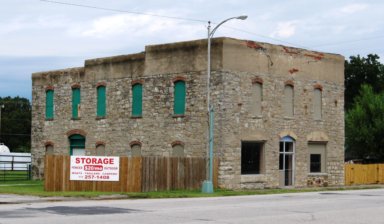 This is the rock building that was a livery visited by the Dalton Gang.

Other visitors today hailed from Basel Switzerland, Birmingham U.K., Denver, Kansas, and Arkansas, as well as a hearty helping of local Oklahomans.  The British man is a photographer who specializes in close-ups of vintage cars, so he took some arty photos of our cars which he said will soon be displayed at his photo site: David Cross - RedBubble

During my down time, I was able to compile guestbook statistics for Jan. thru Aug. of this year.   I'm excited to report that I had visitors from 18 countries and 45 states during that period.   The only states not represented were Hawaii, Massachusetts, Montana, N. Dakota, and S. Dakota, but just two weeks later folks from both of the Dakotas visited (on the same day).  I'm thrilled by these stats.  Who says auto tourism is on the wane?

Laurel, we've had rain the past couple of days, too, but we needed it! Today was a little overcast, but no rain, so I think Gustav is "drying up."

Great to see those statistics, and know that despite gas prices, people aren't giving up on road trips!

So glad you had a good day today, and glad to hear what a diversity of visitors you are getting :o)

Route 66 has been a fascination to people for a decade. Sounds like it will continue to be that way hopefully for another decade. We are getting some pretty good rain storms this way in upstate NY right now. Nothing compared to what you have gotten there. (Hugs)Indigo