The State Fair is in Tulsa this week, so on my way out of town this morning I drove past the fairgrounds to check out a Tulsa icon, the Golden Driller.  He's a 76 ft. tall statue of an oil field worker, and for the other 51 weeks of the year we are accustomed to seeing him with the clothing sculpted to him.   But during the Fair each year a local radio station dresses him in an enormous t-shirt.  I've never actually seen this feat being accomplished, but I'm guessing that pretty big cranes and cherry-pickers are involved.  This picture was artificially lightened, since I shot it barely at sunrise. 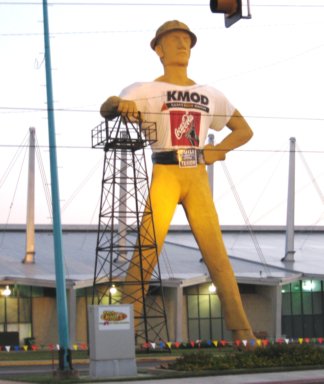 As soon as I got out in the country, a heavy fog descended and remained all the way to Afton.  This morning, I couldn't tell you if the cows were standing, sitting, or turning cartwheels!

I arrived in Afton an hour early, and right behind me was a couple from Sweden.  I turned on the lights for them and invited them in.  As a habitual earlybird myself, I have great respect for people who like to get on the road early, and I'd never refuse them entry.  Almost immediately after that, a guy on a motorcycle from Hutchinson, KS arrived.  After the early morning rush, I had a free half hour at which time I cleaned out the popcorn machine (we made popcorn yesterday but barely had time to eat any of it), restocked some merchandise, stamped a big pile of our postcards with an "Hours of Operation" stamp, cleaned the bathroom, and discovered that a can of Dr. Pepper I'd put in the freezer section of our little fridge yesterday and then forgot about had... you guessed it... burst and made quite the mess.  Never a dull moment!

At about 11, two cheerful couples from France (Paris) came in.  I got a kick out of the fact that they all crowded into the little restroom at once and I heard them giggling in there.  They'd found the old condom machine and loved it!   One thing that I continue to notice is that Europeans do a lot more walking than American visitors.  Whereas most Americans park at our door and come right in, folks from other countries tend to park down the street and walk to the Station, or just stroll around town snapping pictures.  Hmm...do I detect an obvious link to the fact that the obesity epidemic here is much more serious than in other countries?  No criticism here, however, since I'm definitely one of those "park at the door" Americans.  Just an observation.

A father with daughter about 6 years old came in, and the little girl fell in love with the squashed penny machine.  Since she lives locally, I'm sure I'll be seeing more of her.  Then came a lady whose daughter is opening an antique shop and "Route 66 information center" in Vinita (15 miles west of Afton), looking for ideas and advice.  It will open next week and be called Prairie Wind Antiques.

I had a surprise visit from Ron "Tattoo Man" Jones, who had been at the Route 66 Festival in Springfield IL this weekend.  He hit the road at 3:45 this morning and got to Afton Station around 1 p.m.  He only stopped for a few minutes because he was really tired, but he reported that the Festival was as much fun as ever, and well-attended.

PS - I forgot to mention this before.  As I was closing up, I noticed a camera on the counter, obviously left behind by a visitor.  Figuring it had to be the last people there, two women from Pawhuska OK who said they were going up the road to drive the 9-foot highway before heading further east, I put the camera in the car and hoped they were still somewhere within range.  I couldn't find them on the 9-foot highway so I just took the camera back to the Station and I'm not sure what will happen next.  I have a volunteer opening tomorrow and maybe the ladies will come back.  I feel really terrible about this whole thing.  They didn't even leave full addresses in the guest book, so it's up to them to contact me.  If you're reading this, Ladies From Pawhuska, I have your camera!!!

One of my favorite things to see on the Road is what I call the "giant guys," and my favorite so far has been the astronaut at the Launching Pad Drive-In in Wilmington, Illinois! There are at least two others in Illinois, one holding a hot dog and one holding a tire. I don't know why, but I get such a kick out of them, and your Golden Driller reminds me of them!

I suspect that Europeans DO walk a lot more than we do. When Ken and I go on vacations, we do a lot of walking around the city. We always tend to eat more on vacation, but we've never gained weight because we always try to walk a lot, too. And you can certainly see things a lot more "personally" when you're out and about!

That was nice of you to try to get the camera back to the ladies from Pawhuska. I hope they see your entry, or remember they left it at Afton Station. How upsetting to leave your camera behind!

Have a great week, and I'll look forward to more tales from the Road!

The giant with the hot dog is in Atlanta, IL, although it was somewhere else until just a few years ago.  I have seen the Wilmington giant, too.   I love them, and in fact I'm working on getting one for Afton Station.  It's about 15 miles away on the road to Grove, in front of an old flea market that's all grown up with weeds.  But Betty knows the lady who owns it, and she's not ready to get rid of it yet.  We're going to keep working on it.  Moving it to Afton will be a challenge, but David said it's the kind of fun challenge that he loves.

By the way, the Tulsa Golden Driller is at least 2 - 3 times taller than those giants we both like.  The photo doesn't really show how huge he is.

Maybe you should schedule a visit to the fairgrounds when they take the shirt OFF. At a minimum, it would give you input for an interesting blog entry title.

Denny,
Hmmm..... good point!   I'm already thinking of titles.  If you can come up with something more clever than "Undressing the Big Guy", let me know.   :-)