We don't have mountains here in Oklahoma, but today the sun rose over some "cloud mountains" as I was driving to Afton Station.  I shot this picture as I was leaving Tulsa on Route 66. 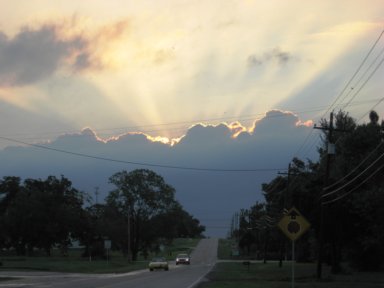 The operative word here is "sun".   Since the weather looked promising today, I hoped my day would be filled with travelers who had come out of hibernation.   And my hope was fulfilled. It was a very good day at the Station.

Betty was my first visitor.  She came by on her way to church to bring me a another pound of that Amish churned butter she gets in Choteau when she goes there to visit her son.  I love that woman!   Thank you, Betty.

The wind was pretty strong today, and moments after I put out my wooden OPEN sign, it blew over and broke into three pieces.   I couldn't find the electric drill, so it hasn't been fixed  yet.   When I checked the restroom, there was a sizeable puddle on the floor and a new leak sprung in the ceiling.  I'm counting on the ceiling not falling down any time soon.   :-)  Ok, enough tales of woe from me...

I had 21 visitors today.  First came a young couple from Switzerland, followed by a long-haul trucker from Minnesota who was hauling a load of Whitmore Greasers.  Do you know what they are?  I didn't, but he told me all about them. Whitmore Group to Market New Rail Grease Using Catalyzed Materials From Platinum Research Organization | Market Wire | Find A...    Well, I found it (sort of) interesting....   LOL!

A couple from North Carolina stopped on their way to a Porsche show in Albuquerque.   A couple from York (U.K.) visited for the second time.  The last time they were at Afton Station was three  years ago.  They were doing Route 66 east-to-west then, but this time they were trying a west-to-east trip, which they were finding a lot more difficult.  Some local folks dropped in (Pryor, Vinita, Afton) and then came two young guys from Dallas returning from a rockabilly concert in Missouri.  They were dressed totally in '50s "greaser" garb, with sideburns, long hair, white socks, rolled up t-shirt sleeves, etc.   I asked them if they were in costume, then wondered if I'd insulted them when they told me they dress that way all the time.  Oops! Just as I was closing, another couple from N. Carolina came in.  Basically, they were lost and asking for directions, but they took a little time to look around.

David and his 3-year-old son Patrick spent a couple of hours with me.   I got to do a little babysitting while David loaded some stuff into his truck.  Patrick and I had fun playing with his toy gas station and then making some squashed pennies.

Glad to hear things cleared up and people were out and about. We got terrible rain all weekend (today's rain was because of Ike), but no winds. It looks like things are finally clearing up!

Have a great week!

Glad you had a good day :o)