There was a parade of interesting folks into Afton Station today, including friends old and new.  Ron M. was with me as usual.  Betty W. spent part of the day with us which was nice since we haven't seen her for a few weeks.   Crazy Legs Walker came by on his way to a shoot out in Claremore.  We haven't seen  him for a while either.   We were also happy to see Scott up and around after a health scare and a hospital stay for a few days last week.  Robin stopped in too, so it seemed like old times again. 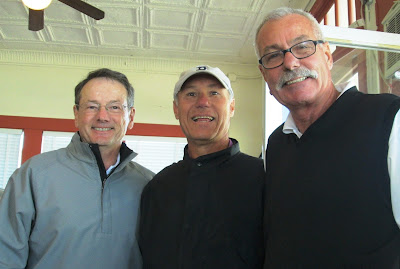 These three gentlemen are from Louisville, Kentucky.  Route 66 has been on the bucket list of the fellow on the right, so he grabbed a couple of his friends and said "Let's go down the road!"  They did, and are having a great time working and playing their way to Santa Monica. 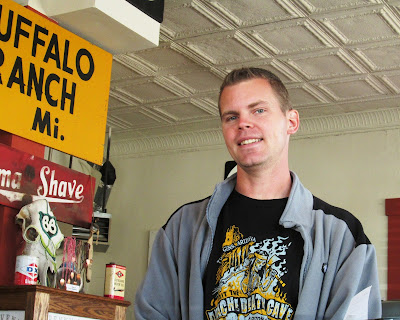 This is "Roamin' Rich" Dinkela, who is well known by all Route 66 fans.  He travels the Mother Road as often as he can and makes great videos which he shares with everyone.  He is also the guy who is responsible for all those beautiful shields that are stenciled on the road from Chicago to L.A.  He drives a car covered with Route 66 bumper stickers and signs.  I'd say he's right near the top of any list of steadfast Route 66 ambassadors and preservationists.

We had some repeat visitors, including Col. Sue Dulaney from Claremore, OK.  She's known for her store which is directly on Route 66 that has her name emblazoned on the roof in huge letters.  She's a well-known local auctioneer, which is how she earned her "rank" of Colonel, an accolade for long-time successful auctioneers.

Today left me energized and not really ready to shut down for the winter.  I can't wait to see if tomorrow is just as great.