What started out to be a quiet morning soon turned to anything but.   Surprise!  A group of travelers we weren't expecting started pouring in the door.  Many were driving cool vintage vehicles.
Early this morning, before leaving the house, I had checked my Facebook pages are realized that Craig Parrish's group, the National Route 66 Motor Tour, was heading our way, so I shot a note to Craig to remind him to mention Afton Station to his travelers.  He did.  Eventually we had dozens of people in the building, most of whom had decided to visit us either before or instead of going to Daryl Starbird's Custom Car museum.  We ended the day with 42 (and then some) visitors, most of whom were from the tour.  Those on the Tour were all driving their own vehicles.  Craig supplied evening motel reservations and suggestions for places to visit between nights, but otherwise the members of the group were on their own.  We are so pleased that so many chose to visit us, and we thank Craig for any gentle nudging he may have done. 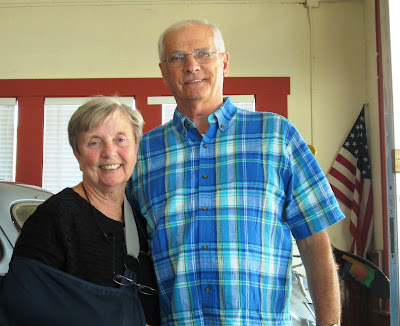 It started with Lou and Debi from Rainham, Massachusetts who came to visit us instead of heading for Daryl Starbird's museum where a majority of their group was going.  Lou and Debi are from New England so we had something in common to chat about, and they were delightful folks. 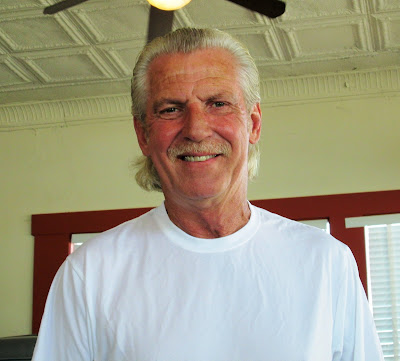 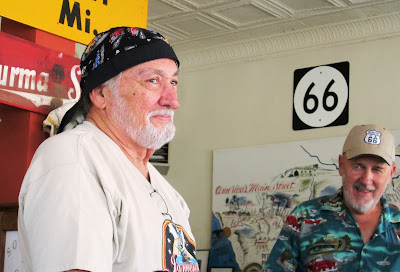 One visitor tried on a do-rag and immediately transformed himself into a Willie Nelson look-alike! 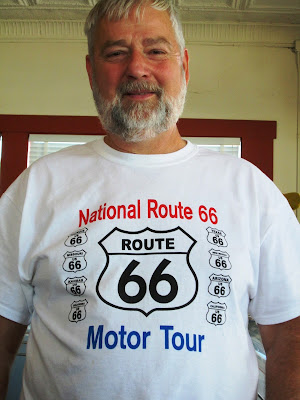 This member of the tour is sporting the official tour t-shirt. 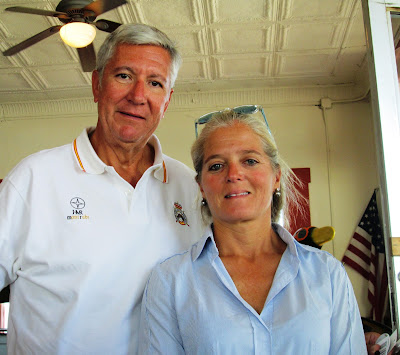 Some visitors who came on their own in the afternoon were this couple from Barcelona, Spain.

Our junior volunteer Justin, who is now being home schooled, came in during the busiest time of day and was a big help to us, making change and bagging purchases.  Ron M. was there, as always, and did his usual expert job of telling folks the story of Afton Station and leading them to the showrooms.  We have such a great team!