One of THOSE weekends

John had to leave this morning on an early plane.  Sarah leaves late this afternoon.  So, today we are going to continue this fun and do some shopping and errands. But first, here are a few photos from the weekend. 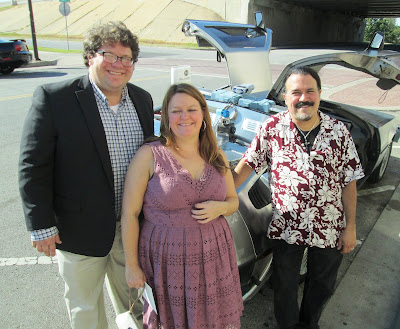 Sarah and John meet the owner and builder (right) of the incredible "Back to the Future" DeLorean which was parked outside of Cain's Ballroom during the wedding at which I officiated. 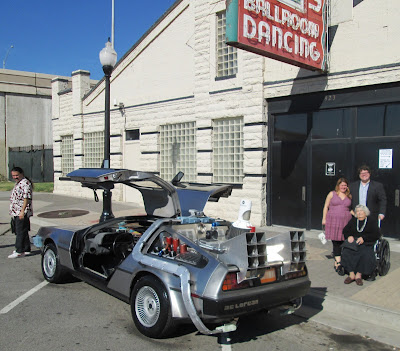 This car is amazing, and completely accurate to the one in the movie. 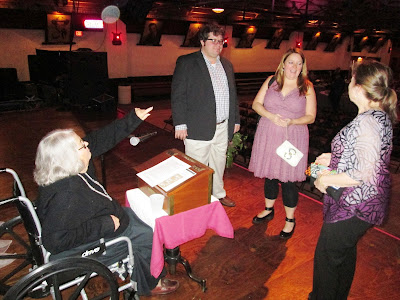 Getting used to the stage, microphone, etc. for the wedding.  Sarah and John meet my friend Susan Yates, a wedding guest. 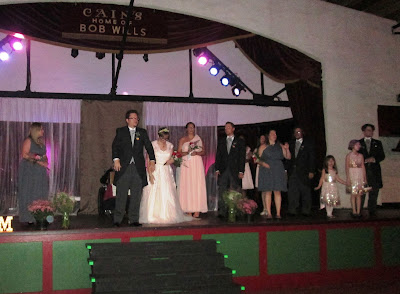 Presenting. . .  Mr. and Mrs. Rhys Martin!  I got through the ceremony without a stumble.  The nerves I felt when seeing the huge room filled with people melted quickly when I read the beautiful words that Rhys and Sam had written for the ceremony.  They're a great couple, and I'm honored to be the one who joined them together legally. 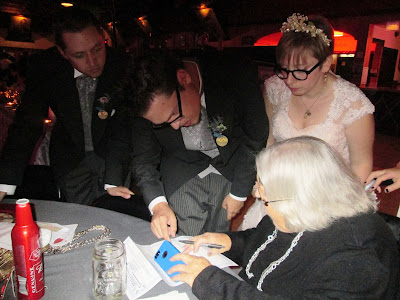 They signed the papers. . . 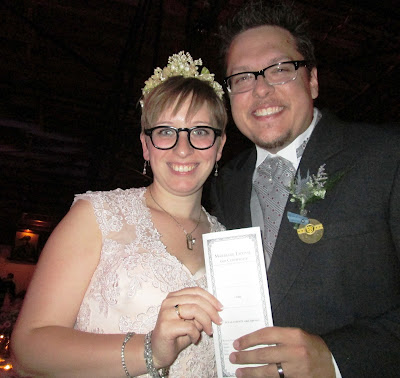 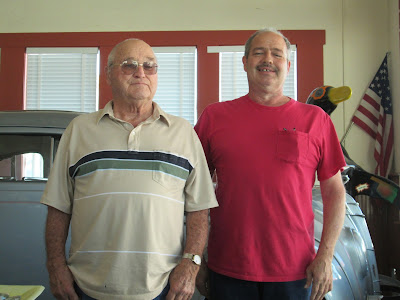 On Sunday, with the usual help of Ron M., we greeted guests at Afton Station.  These two fellows from Arkansas came to see the Packards. 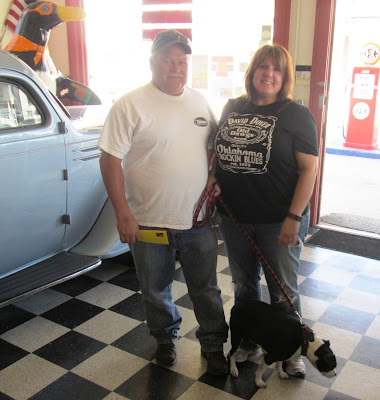 A couple from Tulsa with their rescue dog, Taco Bell" also came for a visit. 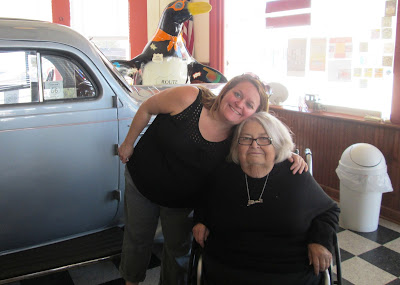 And of course I took time out to accept a hug from my dear daughter. 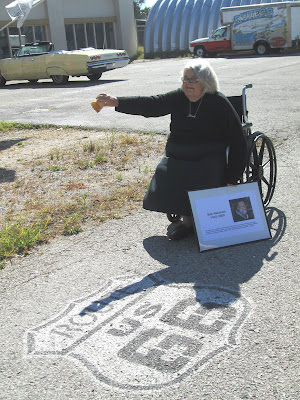 I have been acting as guardian of a portion of Bob Waldmire's ashes ever since he passed away and was cremated about 4  years ago.  His ashes were divided between about six of us whom he considered his best Route 66 friends (an honor in itself!) and we were charged with scattering them where we felt would be approved of by Bob himself.  Until now, the inspiration just hadn't hit, but Sunday was such a lovely cool, breezy day that it seemed right.  Sarah was there, and she and Bob always hit it off so well. (Sarah was especially fond of Bob's home made salsa, and she got the very last jar of it which he made before he died.) Anyway, we went out to the front of the Station, into the road next to Roamin' Rich's stencilled sign, and scattered Bob to the wind.  He would want to be on  his beloved Route 66, and the ashes blew in the air and then settled on the Mother Road. We miss you, Bob! 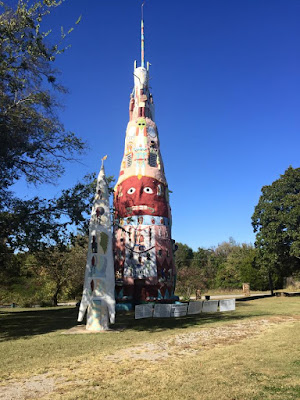 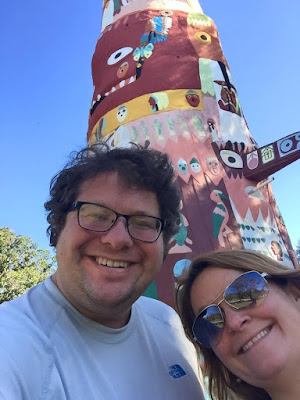 The newly repainted Ed Galloway Totem Pole looked good, despite being taken over by an uncomfortable swarm of wasps.  Sarah and John didn't stay there very long. 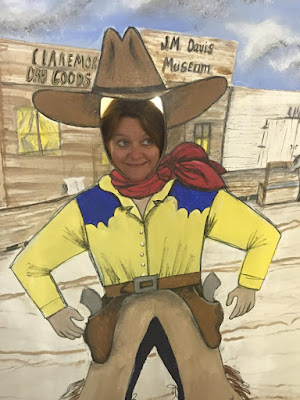 The J.M. Davis Arms and Historical Museum is always interesting.  It's the largest gun collection in the world, but if you're not a gun fan (that would be me), there is SO much more to see there.  Some extremely interesting exhibits there!   Here, Sarah is contemplating a shoot-out. 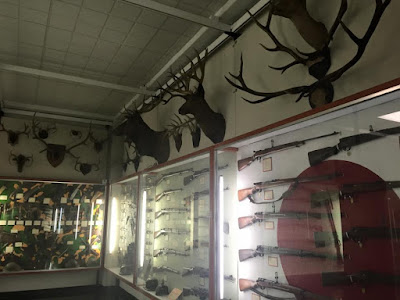 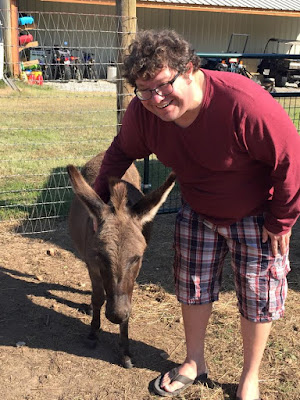 Sarah and John visited David at his new place in the country and were introduced to his 4 new miniature donkeys.  So here are a couple of asses (Oh John, you know I love you.  I just couldn't resist. . .)

Since Afton isn't ugly enough as it is,  someone is now having a broken toilet sale on the side of the road.  Sigh.....

That's all for now.  The other hundred photos we took this weekend will  just have to wait.

Laurel, I absolutely love your style of writing. You certainly have a gift with the written word. You're so descrprive that I feel as if I am right there wit allof the action. The flair with which let your wit and humor bleed through the lines is so good I can honestly say that you and I would be the best of friends if I lived closer to Afton.
The 'broken toilet sale by the side of the road' cracked me up.

Laurel, I absolutely love your style of writing. You certainly have a gift with the written word. You're so descrprive that I feel as if I am right there wit allof the action. The flair with which let your wit and humor bleed through the lines is so good I can honestly say that you and I would be the best of friends if I lived closer to Afton.
The 'broken toilet sale by the side of the road' cracked me up.