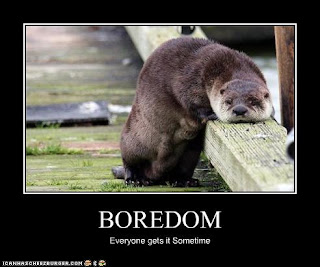 I've heard it said that people are never bored unless they are boring themselves.  I've often been plagued by boredom, so I guess I'm not the most exciting banana in the bunch myself.  Peak boredom time for me is the week between Christmas and New Years.  At this time, I'm right on the edge.  If I don't keep myself busy, even with the most prosaic of tasks, my boredom could spill over into the realm of depression, and that, for me, is an absolute no-no.

It's not that I don't have a lot to do.  I'm hosting a fairly large gathering in the near future, but everything for that is either finished or is something I'm not in the mood to do today.  Whether the mood strikes me to do those things tomorrow is up in the air this moment.  I'm reading a very good book, but 4  hours of reading it this morning at dialysis has about done my eyes in.  I have a number of projects I could launch, but I just don't feel like starting something new.   I could go to Afton, but sitting alone in a cold room doesn't sound like much of a cure for boredom.  And I don't much feel like seeing other people, either.

So, I must face the fact that, if you should happen to run into me today, I will be boring. Not surprising since my high school newspaper "Senior Predictions", named me "Most Likely To Be Bored".  Does that mean I was boring back then, too?  Probably.  Or was it a self-fulfilling prophecy?   As an only child, I was always able to amuse myself with no effort.  Now, it takes more effort.   I'm going to engage that effort right now. . .
_________________

I just came back from a drive in my Subaru.   I cruised three alignments of Route 66 in Tulsa and found nothing that 1) I haven't already photographed or 2) isn't worth photographing.  I'd better not be running out of material for this blog.   I implore  my readers to hang in there with me for a couple of weeks when posts will be sparse and, face it, probably boring.  After a week or two, I predict that the film will fall away from my eyes and things will start to look new again.

I've decided that I need a picture on this post, and what could fit the theme of "boring" more than this shot of the cupboard in which I keep my plastic containers.   Yesterday Ron M. gave me a big box of nice new Rubbermaid ones in many sizes, so last night (as only a boring person would do on Christmas night), I cleaned out the cupboard, threw away all the old containers which had no lids or vice versa, and now when I open the cabinet door they no longer rain down upon me like big, unmatched square rubber hailstones.  Thanks, Ron! 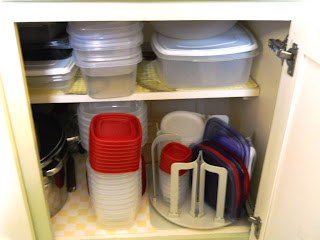 Of course you are not boring. I personally think everyone gets bored occasionally. I do, but have never had an urge to clean and rearrange a cabinet. I did think about it once, the thought quickly passed.

Yeah, I'm pretty sure I'm done with cupboard cleaning for another decade or two. :-)