We were all most pleasantly surprised by how this cold day in December turned out to be one of the more interesting days we've had at Afton Station. Ron M., Phil, Robin, Tattoo Man and I were expecting a typical quiet winter experience, but that didn't happen.  We knew it was going to be a good day when the first car to drive up was this beautiful replica of a '37 Auburn Boattail Speedster!   The gentleman (from Vinita, OK) has only owned it for one day, and we were quite honored that we got to admire it on his first day of ownership.  He and his friend were very nice guests, too. 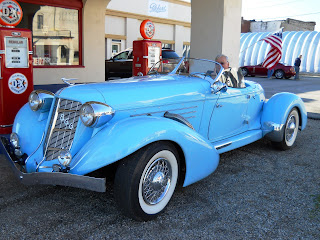 Next, famous car customizer Darryl Starbird walked through the door.  He was looking for a good background for magazine photos of some of his cars and liked the looks of our building and pumps.  He was also lured in by the aforementioned Auburn which was still sitting in our parking lot.  He was with his visiting grandson from Placentia, CA  and they both enjoyed touring our new showroom, which wasn't built the last time Darryl came to visit.  He also gave me an autographed copy of his amazing, huge coffee table book.  Here he is talking to the Auburn fellows. 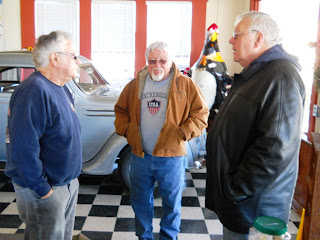 More folks came, and they kept on coming.  All were local, but all were interesting.  They came from Joplin MO, and Bernice, Tulsa, and Grove OK.   And then these two guys showed up.  They were such fun!  Dwight (right) is from Dayton, OR and has an extensive collection of very intriguing vintage cars, many of which his father pulled from hay fields during his job of mowing hay.  Pat (left) is from Kansas City.  We certainly enjoyed visiting and laughing with them (and they both bought sweatshirts.  Yippee!) 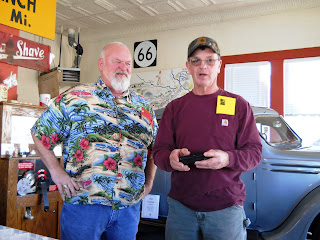 Since yesterday was the 2nd anniversary of artist and friend Bob Waldmire's death, Ron, Phil, Robin, and I toasted him beneath the mural which he painted and which we are honored to own.   Bob was one incredible fellow, and although Robin and Phil never met him, they feel they know him simply from his reputation.  He is missed by everyone who calls himself or herself a true roadie.    (We toasted with a bottle of champagne.  No wonder it was such a good day!) 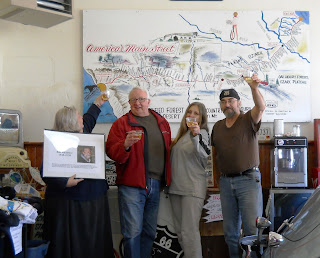 But we're not done yet!   At the very end of the day we had an anticipated visit from the Millers.  Travis is a filmmaker who had communicated with me about the possibility of using some of our cars in one of his movies.  We said "sure" so he and his wife came to look over the fleet.  They found some they'd be interested in, and they also showed a great interest in using the town of Afton as a potential backdrop for films in the future.  Nice people, and I look forward to working with them. 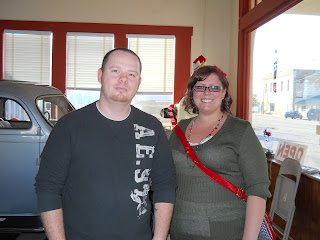 A brief visit from Dean "Crazy Legs" Walker rounded out the day with a grand total of 15 visitors, quite a departure from the typical lonely December weekend.  It was a beautiful day. I wonder if Bob Waldmire had anything to do with that??