The Joy of the Internet

Not infrequently, I hear folks complain about the Internet.  Many of their complaints are valid, and so are some of mine.   However, when I contemplate what my computer has added to my life in these past 20 years, the joy far, FAR outweighs the problems.   Number One on that list of joys is the actual huge number of people from all over the world that I've met online, then later have been privileged to meet face-to-face.  For example, back in my Prodigy days, my Postcard Collecting group had yearly conventions in various cities.  After a couple of  years, I remember counting up the number of people I'd first met online and then later in person.  The number was well over 100.  Now, so many years later, I'm sure the number has tripled or quadrupled.  Many of those folks have become my friends, quite a few have become good friends, and one in particular, Ron M., has become a "bestie".  But instead of extolling the wonderfulness of Ron M. in this post (since I hope he already knows it!), I'll go on to introduce you to my newest "up close and personal" friends.

I've been reading the blogs of Ken and Beth Riches for a number of years.  It didn't take long to figure out that they are a bright, articulate, and fun-loving couple.   They share my views on politics and religion, and the icing on the cake is that they're Route 66 fans!   I was excited to find out that they were coming west on Route 66 from their home in Indiana this summer, and yesterday turned out to be the day they visited Afton Station.  I wasn't wrong in my assessment of Beth and Ken.  Lovely folks with the sense of adventure I share. 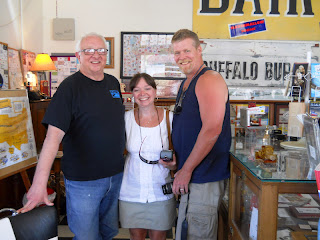 Here they are with Ron M. 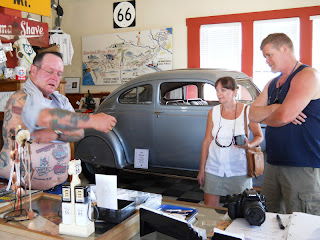 Watching in awe as Tattoo Man performs his striptease.  Or perhaps I should call it his "Tattoo Tease".  He stopped in on his way back from getting his 110th or 111th . . . or oh heck, I've lost count again. . . tattoo in Joplin.


The fun with Beth and Ken wasn't over when we left Afton Station in the afternoon, however.  Ron M. and I met up with them again at one of my favorite restaurants in Tulsa that evening and enjoyed some good food, good beer and wine, and excellent conversation (although a Wine Dinner being held in the same room where we ate made the place a bit chaotic and very noisy!)

Both Ken and Beth are blogging their trip, so check out their wonderful photos and comments at: www.nutwoodjunction.blogspot.com and www.buckoclown.blogspot.com.

In other news, we had quite an array of visitors to Afton Station yesterday (24) although it didn't beat the number Robin handled the day before (38).  We've certainly had some good numbers this May, and we have every reason to believe they will increase as the summer wears on.   Our visitors today came from Seattle WA, Santa Clara CA, Neosho MO, Dandridge TN, Dallas TX, Scotts Valley CA, South Bend IN, Bremen Germany, Hamar Norway, and Grove, Neosho, Oklahoma City and Strang, OK.  Many arrived near the end of the day, so things got a little crazy, but we managed (I hope!) to greet everybody with a smile.  Marly was around to add his smile to ours.  Robin and Phil were each there for a while as well. 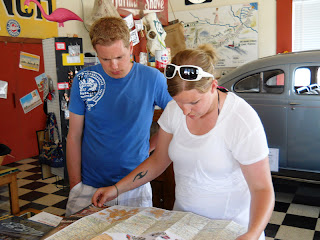 Our new friends from Hamar, Norway studying the Route 66 map.

What a great pleasure it was to meet you, Laurel! I've had the discussion with folks where we've found that if you've been reading someone's blog for a while, their true personality comes through, and if you like their blog, you'll probably like THEM.

That was certainly the case here, and we were both so pleased to have met you and Ron and the others. You've got a heart of gold, and I am proud and happy to call you my friend.

Ditto what Beth said. It was wonderful to see Afton and the cars. You have done a great job and are a great ambassador for the road.

Despite our political differences (I'm a right-wing Conservative and you're a wrong-wing liberal :)), I like how we've become friends via the internet. I like how I've learned much about Route 66 from Ron Warnicks blog, and other blogs about 66.

Awww, such nice things being said by such nice people (yes, even you Trevor...LOL). I'm not sure I deserve such nice words. Ken and Beth, it was absolutely wonderful meeting you and spending time with you. Trevor, our political differences melt away when Route 66is the subject!