I Hope You Have a Comfortable Chair

It's going to be a long ride, I'm afraid.  Yesterday (Sunday) at Afton Station was an eclectic mix of fun, surprises, craziness, and just a touch of disappointment.  By the time I closed up and drove the 85 miles home, I was pretty beat!

I left home at 6 a.m. and arrived at Afton Station at 7:30 because we were anticipating the early arrival of folks who are filming the PBS TV show Globe Trekker, a British based show which also airs in the U.S., although I've never seen it. http://www.pilotguides.com/tv_shows/globe_trekker/index.php   Marly and Phil both watch it and say it's extraordinary.   They're doing a segment on Route 66 which will air here in the U.S. in about a year. 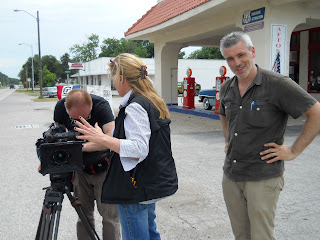 Marly was at the Station even before I got there, getting a couple of the old cars ready to be filmed as they drove down the road.  Phil came shortly thereafter.  David arrived just before the film folks got there, in time to drive one of the cars for them. The reason the film company chose Afton Station for the majority of the program is that the advance production people met Phil one day when I wasn't at the Station and it was he who related the charms of Route 66, the cars and -- of course -- Afton Station to the folks.   He told them that they needed to give some publicity to the Route 66 aspects of Station as well as the cars.

As it turned out, it was all about the cars.  They didn't do any filming inside the Station whatsoever, and that put me in a bum mood for a while.  Although I'm sure they will emphasize Route 66, mostly they just had David and Marly driving cars up and down the road, over and over again.  They even had Marly drive the '55 Packard all the way to Chelsea (35 mi.), filming the entire time.  The film crew couldn't have been nicer, and I am thrilled that they chose us for an episode of the show, but I still wish they'd come in to see what we had to offer inside.

Once that excitement was over, the day was wonderful.  We had 25 visitors altogether.  The surprise of the day was when my friend Gordo Radford from Washington, Missouri drove up on his gorgeous vintage Valkyrie bike.  He's the photographer who creates those beautiful and artistic Route 66 postcards which I sell at the Station.  It's always nice to see  him, and I'll be seeing him again tomorrow when he comes through Afton in the other direction. 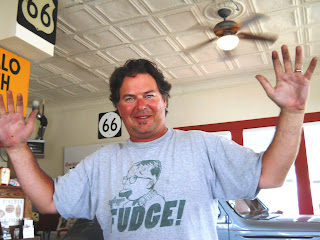 Riding along with Gordo, although they'd just met for the first time at his last stopping place, was one of, --  if not THE -- most engaging, beautiful people who has ever come to visit.   His name is Yan Wang and he's from Tiang Su, China.   Marly and I were both charmed by Yan's friendliness, totally unbridled enthusiasm for Route 66 (and life in general), and his eagerness to be friends, not just acquaintances.  Here he is with Marly.  I wish he could have stayed much longer! 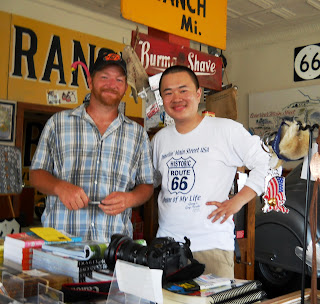 These visitors were also simply great folks!   They're from Garland, TX and are doing a portion of Route 66 which they missed on previous trips.  More infectious enthusiasm. 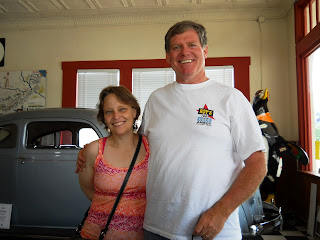 Our other visitors came from Plymouth MI, Fairview OK, Joplin MO, Venice Italy, Moline IL,  Santa Fe NM, and Carmel CA.   Another great surprise was a visit from one of the people who works at my dialysis unit, a very cool lady named Jeannie.  She brought her husband Ronny whom I'd not met before. They were spending the weekend at Grand Lake and decided to drive over to Afton.   Yes!

My friend Susan Yates, who made the popular weighted Route 66 coasters which I sell at the Station, has come up with another useful product with a Route 66 theme.  During a chat with her, I mentioned that some folks I know have persistent lower back problems.   The other day, on my front porch was a box containing 4 "heating pillows" with Route 66 fabric covers.  They're filled with field corn (not the popping type) and are heated in the microwave.  Well, of course we had to give one of them a try.   None of us had a back ache, but Phil had a little headache, so we applied it to his head.   That pad continued to emanate a moist heat for a full half hour!   Very impressive!   Check out Phil and his new "hat". 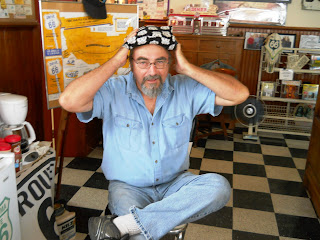 I left Afton an hour later than usual because folks continued to come through the door.  In fact, Marly was still putting away the cars when I left. He sure did yeoman's duty yesterday!