Another crazy and busy day at Afton Station!   Phil opened again for me, alleviating the crazy rush when people are there even before I arrive..  Shortly after we opened, Robin arrived with her daughter Tammy who is visiting from Madison, Alabama.  She's a very sweet and pretty lady and since she'll be around all week, I hope I have a chance to visit with her again. 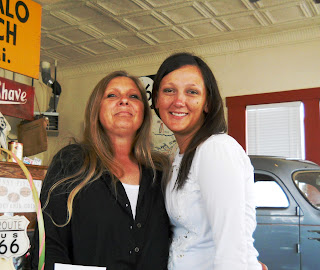 Next came one of our uninvited visitors. . . this very sleepy little dog named ????  Although he wore a collar and a flea collar, he had no identification.  Clearly, all he wanted was a little attention, some love, and a place to catch some ZZZZs.  He was so gentle and obedient that we became quite taken with him.  He stayed all day.  Then, when we weren't watching, he disappeared!   (I hope so anyway... we did check around before closing up, in case he was sleeping under a car or something).  He was such a nice dog that I almost wished I could keep him. 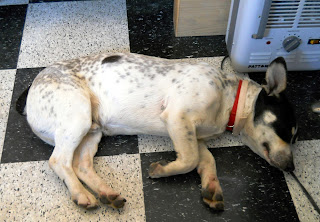 Our next uninvited visitor was far more active and problematic.  A starling flew in the door. . . and didn't immediately fly out -- although he certainly was trying.... and judging by the number of times he crashed into the windows, I'm sure he had a major headache by the time he finally found the door.  Poor bird!

We also had a visit from Michael  from Eagle Point, OR, a guy who spends a lot of time traveling from Tucumcari NM to Pontiac IL, spreading cheer and good Route 66 feelings.  He's visited us before.  He sleeps in his car and simply travels the Mother Road for his own enjoyment.  His wife, who doesn't travel with him, makes some lovely handbags and wallets from Route 66 fabric, so I bought one of each (all I could afford) to sell at the Station.

I also bought a pile of t-shirts from one of my other vendors, a very nice fellow named Greg Gazak from Zak's  on Route 66 in Missouri.   I won't have them for sale for a few weeks, but I liked the designs, and so did the people who were visiting the Station at the time, whom I polled.

Here are a couple from Bordeaux, France who were thrilled and excited that we have a Citroen Deux Cheveau in our car collection.   Despite speaking very little English, I was able to communicate with them using my vast knowledge of French (NOT!). 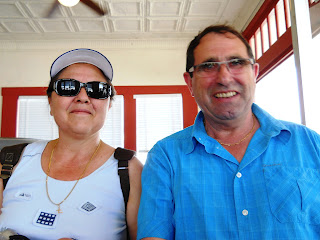 And then there were these two young ladies from Charlotte, NC who began their Route 66 trip at Afton Station!  Oh, what fun they are going to have along the way.  They're just the kind of enthusiastic guests I really enjoy.  They're heading for California but they only have 10 days, so they'll need to move right along. 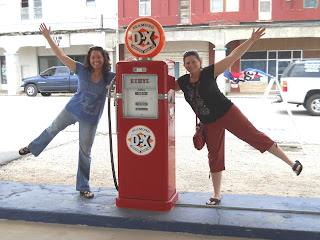 Our other visitors came from Riverside CA, Eufaula OK, Yorba Linda CA, Broken Arrow OK, and Mt. Juliet TN.  There were 16 visitors when I left, but Phil was staying on for a while, so that number may increase.