Time for Some Steinbeck 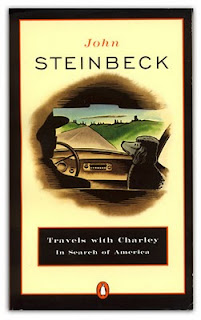 2012 is the 50th anniversary of the publication of John Steinbeck's Travels With Charley in Search of America.  It's interesting to note that some things never change.  Case in point:  this excerpt. . .

I sought out US 90, a wide gash of super-highway, multiple lane carrier of the nation's goods. (. . .)  The minimum speed on this road was greater than any I had previously driven.  I drove into a wind quartering in from my starboard bow and felt the buffeting, sometimes staggering blows of the gale I helped to make.  I could hear the sough of it on the square surface of my camper top.  Instructions screamed at me from the road once:  "Do not stop!  No stopping.  Maintain speed."   Trucks as long as freighters  went roaring by, delivering the wind like the blow of a fist.  These great roads are wonderful for moving goods, but not for inspection of a countryside.  You are bound to the wheel and your eyes to the car ahead and to the rear-view mirror for the car behind and the side mirror for the car or truck about to pass, and at the same time you must read all the signs for fear that you may miss some instructions or orders.  No roadside stands selling squash juice, no antique stores, no farm products or factory outlets.  When we get these thruways across the whole country, as we will and must, it will be possible to drive from New York to California without seeing a single thing.

How achingly true are these 50-year-old words.  I do drive interstates sometimes -- frequently, in fact, on my way home from Afton.  If I'm in a hurry to get home, those 85 miles go a little faster on I-44.  I've found that the MPG on my little Subaru is incredibly improved if I keep it to 65 mph, however.  That means that I probably irk some fellow drivers on the 75-mph superslab, but that's just too bad. I do, of course, only poke along in the slow lane, and never violate the speedy one.

On the interstate, I get to see different cows, but that's about all.  Folks in passing cars never glance left or right, unless to scowl at my slowness.  They probably think I'm going 65 because I'm just a pokey old lady, but that's not the case.  I just enjoy the sensation of NOT going 75 or 80.  The interstate is mesmerizing at any speed.  I'll take the twists and turns, the ups and downs, the tiny towns, the roadside parks, on the "small" roads any day.  In Steinbeck's day, the interstate highways were in their infancy.  Unfortunately, they've developed to the point that some younger folks barely realize that there is an alternative to their monotony.

When Steinbeck was traveling all over the country with Charley, he found it necessary to hop on the interstate a few times, too.  So, if you can forgive him, I  hope  you'll forgive me as well.

I recently picked up an abused hardcover of Travels With Charley at a used book store in Normal IL last week while taking a much needed Route 66 family excursion.
-Josh @ Springfield IL

Mine is the paperback, but having a hard cover copy is certainly special! Love the book, although it never attained the fame of some of his other books. My very favorite is Cannery Row, though.