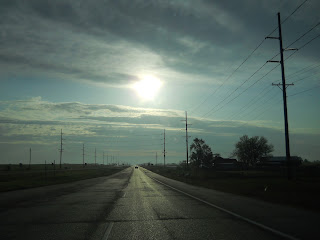 Here's a quandry:   If only three people visited Afton Station today but one of them visited 7 times, do I count that as three visitors or nine?  What a strange day.   Marly is back and stayed with me all day, which was wonderful because there wasn't much else going on -- unless you count the same guy coming in every 20 to 30 minutes.   We have no idea where he came from, but he came on foot so he was either a townie or someone from the mental health clinic behind the Station.  He had money with him and bought more items every time he came in!  When I asked, he said he was buying things "for his sister to market in Florida".   In fact, he almost ran me out of Route 66 stickers!  It was very strange, but I'm not going to throw out a paying customer!

Our two other guests were a most interesting couple from rural Brookville, Ohio.   He was extremely interested in vintage cars, so when Marly took him to the back showrooms, she stayed with me and we chatted.  They're members of the Old German Baptist Brethren sect which seems to be akin to Amish, and yet not actually a part of the Amish or Mennonite religion.  These very nice folks and their cute dog are traveling Route 66 west to the Oklahoma western border. 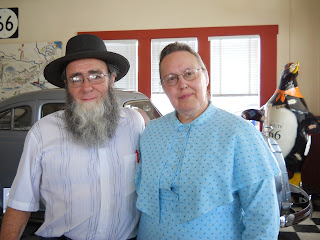 The other day I mentioned that the new owner of the Park Hills Motel in Vinita came in to introduce himself and indicated that he has spruced up the motel and grounds and is eager for Route 66 travelers to stop and check it out.  So today I took a couple of photos if it.   Give it a try if you're looking for lodging in the area.  (I still haven't seen the rooms, so this is not a recommendation, just a suggestion.) 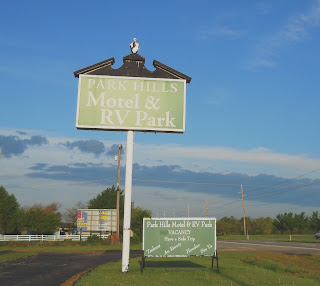 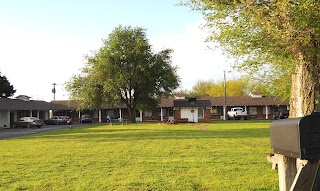 I drove over to the Admiral Twin yesterday afternoon and found that what I believe to be the final panels on the screens are now up!  Lookin' good! 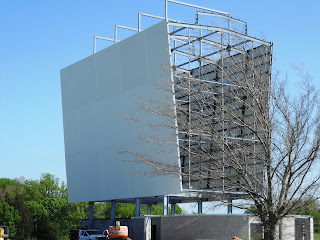 I've been around members of the Brethren Church most of my life but couldn't tell you exactly how they differ from the Amish and other "plain dressing" religious groups. Early in the last century they founded the first nursing home in my home county which remains in operation today as the Brethren Retirement Community. It has long been open to non-Brethren and several of my relatives and friends have benefited from it. While the Brethren themselves drive very plain cars, it's not at all unusual to see some of them admiring fancied up oldies at local cruise-ins.