I Have Some Catching Up To Do

Who knew that being a star would be so exhausting?   Stop laughing.  Ok, go ahead and laugh.  Appearing for a couple of minutes on a video of Scottish bagpipers traveling Route 66 doesn't exactly qualify me for stardom, but a girl can dream.   I'll tell you all about it shortly. . .

I'll start at the beginning of a very long Sunday that capped off a very long weekend altogether.   I got home from Afton very late due to the above mentioned filming.  But before that, we greeted 18 really interesting visitors.   First through the door was a couple from Bartlesville, OK who are participating in the Passport Oklahoma motorcycle event.   Riders have from April 1 to November 30 to visit 20 selected sites all over the state (not just Route 66) and show proof  they've been there.   Contestants who visit all 20 sites receive a prize.  We are quite thrilled to be one of the sites, as we think it will bring lots of folks to Afton Station.  The Bartlesville couple sure picked a beautiful day to begin their tour! 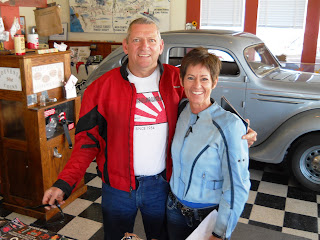 This nicely-restored and tricked out '62 Chevy Biscayne arrived on a trailer on the way to Las Vegas for a huge car show there called Viva Las Vegas. 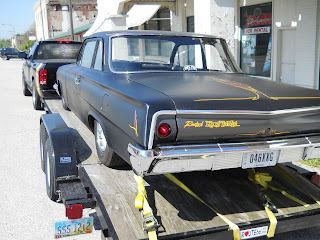 Other visitors included two couples from Broken Arrow OK, a couple from Cedar Rapids IA most interested in Tripper the Penguin because the husband loves "big" things, some geocachers from Vinita OK and Springfield MO, a couple from Pierceton IN, and a local fellow who stopped in to show us some photos of the extraordinary exhibits at the RV Museum in Elkhart, IN because he has visited before and was particularly interested in our 1917 RV.   Reuben and Colleen Tipton from Afton dropped in and I was so glad to see that Colleen has bounced back beautifully from her surgery.  Reuben told us that their corn fields were planted on Friday.

The folks making the film arrived around 3:30 -- John McDonald, a producer from L.A, three sound and light guys, and Janet Hollander, a bagpiper from Seattle who came along as an assistant.   Their mission was to be an advance party for the group of bagpipers from Scotland who will be touring Route 66 and giving concerts in various cities beginning next week.   The filmmakers wanted to hit some of the spots which the bagpipers themselves won't be able to visit due to lack of time.  They're visiting and filming some of the smaller spots between the larger cities where the bagpipers will be performing.   Afton Station was one place recommended for a stop, and I believe we lived up to their expectations.  The video will eventually be available online. 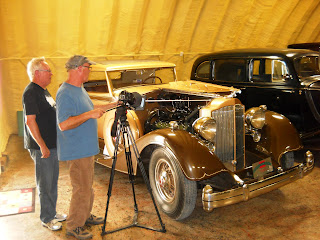 After interviewing me for what seemed like forever (but was probably only about 15 minutes), they began to film each car and each nook and cranny of the Station, a meticulous process which took quite a long time.  While we waited, Janet pulled out her bagpipe and gave us a little concert.  We were impressed. 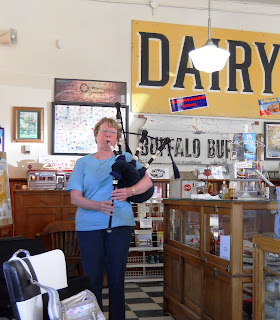 By 7:30, I really needed to close up and head for home, but the filmmakers still hadn't interviewed Tattoo Man, who had been at the Station all day.   They decided that, in order for me to close up and Ron M. and I  would be able to start back to Tulsa, they'd film Tattoo somewhere outdoors in Afton.  I found out today that they chose the 9-Foot highway for his interview, which seems perfect. 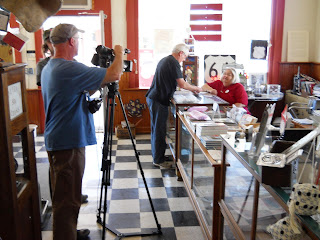 You can read about the "Pipes and Sticks on Route 66" schedule at: http://www.kickstarter.com/projects/1600594186/pipes-and-sticks-on-route-66, and try to attend one of their concerts if possible.

And that's the story of why a long Sunday followed a long Saturday and produced no time to blog or do much else.   What a great weekend!