Another One Bites the Dust

The main event in Afton today was the demolition of yet another historic building in the center of town.   The building in question is the one on the far right in the photo below, taken in the early 1900s when the streets were still dirt.  You can see from the photo that crowds gathered back in those days for happier occasions than the taking down of a building. The building in the middle is Livingston's Dry Goods, which was gone before I ever got to Afton. 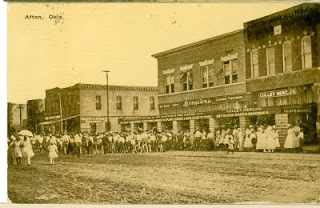 I really hate to see these fine old buildings being destroyed, one by one.  Afton doesn't have many left, and I do a bit of mourning every time I hear the sound of crashing rocks and a huge puff of dust floats down the street.

Here's how the building looked just prior to today's demolition.  The whole back of the structure had already either fallen it in or was helped along by some pre-demo work.  But the front could have been restored.  In this city, the emphasis is always on "get rid of it" rather than "fix it".  I have honest fears that some day the only building left in this once bustling and significant town will be Afton Station, and I feel helpless to do anything about it. 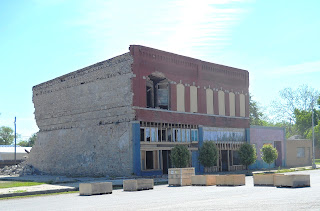 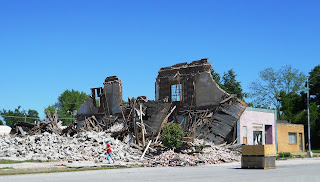 So, all day today there was the boom and crash of history being devastated.  It drew quite a crowd, more locals than I've ever seen in one place at one time.  Everyone stood around to watch the activity.  Young boys (not professionals) were hired to do the demo, and I felt it was an accident waiting to happen as they climbed up into the upper story and attached cables, which were then pulled by various trucks, etc.  It was a long, somewhat disorganized effort, but eventually the walls came tumbling down.  Ron M. (who took these photos), Marly, and Phil went to watch while I minded the store. 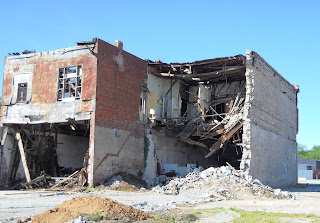 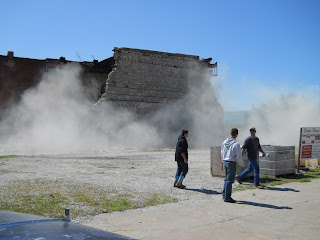 Of course, we also greeted a good number of visitors today as well.  The leader of a group from the Netherlands (U.S.A. Motoriders) came in to scout us out as a stop for future group tours.  Also from Europe came a couple from Nottingham, England.   The rest came from Verona MO, Indianapolis IN, Seligman MO, and Chicago IL, as well as several folks from Afton.   There was so much going on in town that at times there were even minor traffic jams, unheard of in little Afton.  People who came to watch the demo parked everywhere.  That might have been a bit of a strain on those passing through on Route 66 trips, so I tend to think we may have had more visitors on a more "normal" day.  But tomorrow is another day. . .

Congratulations on the 1000th post, Laurel! I enjoy reading them everyday. Our town's too small for a daily paper, and I don't care to start my day with the sort of news that emanates from the city. So yours, along with a couple of other sites are my morning paper.

I'm sorry to see another old building going away. Once they are gone, they don't come back. Looks like a couple more storefronts gone also. Too bad she couldn't be saved.

Sad isn't it when old, but usable things (and people) are taken down. Of course, the expense of restoring in often as factor. Does anyone plan to build on the property?

Congrats on the first 1000 and condolences on the loss of a neighbor.