Yesterday evening I went to dinner with my friend and frequent blog reader Susan Yates.  She had offered to make some of her great coasters made from Route 66 fabrics so that I could see if they would sell at Afton Station.  Frankly, she seemed less sure than I was that they would be marketable.  I was pretty sure they'd be a hit.

Well. . . the first travelers through the door were a neat couple from Ringwood, Australia, driving Route 66 in a rental motor home.  And. . . the wife made a beeline for Susan's coasters and bought one before even looking at anything else.   So, there you go, Susan!   A hit!   (The coasters come in three different Route 66 fabrics and are filled with sand, so they can even be used on the console of  your car without much fear of slippage or sloppage.  A very nice small, inexpensive, "packable" gift.)  Here's our Aussie visitor showing off her purchase. 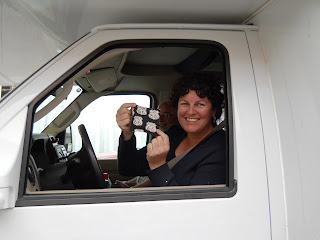 Four people from Glasgow, Scotland were the next (and last) people to visit today.  They, too, are traveling Route 66, but from east to west, whereas the Aussies are doing the west-east route. 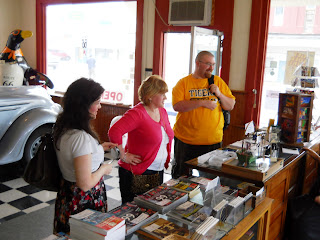 Note that I said that these six were the only "travelers" who visited today.   We also had a visit from the local guy who came in seven times on Tuesday.   Fearing that he would repeat his continual visits again today, I was little less accommodating than I was on Tuesday, so I guess he gave up and didn't come in again.  He's a perfectly nice person, but I sense there was something below the surface that was compelling him to buy things he'd never use and probably didn't really have the funds to continue to buy.  These are the kind of situations that a shopkeeper must handle with some care.

Ron M. helped out today, and Robin and Phil stopped in for a while, too.  It was a rather quiet but satisfying day.