Grand Lake, the largest lake in Oklahoma and just a few miles from Afton, has a bit of a problem this weekend. The extremely toxic and occasionally deadly Blue Green Algae has invaded the lake, and people are being strongly warned against swimming in the lake or even allowing lake water to touch their body in any way. On the biggest lake weekend of the year, this has turned into quite the crisis situation. There has been speculation as to whether the lake ban would improve or decrease commerce in the shops, restaurants, and entertainment venues that cater to "lake people". On one hand, folks might avoid going to the lake altogether. On the other hand, they might continue their vacation plans, but instead of swimming or boating, would visit the businesses in the area.

I, of course, wondered how the lake ban would impact the number of visits to Afton Station. The answer? I have no idea! We had plenty of visitors (28 in all) but very few of them were shopping in lieu of participating in other lake activities. Some were on full Route 66 trips, others were locals looking for a way to spend a ridiculously hot day in NE Oklahoma.

This couple, potentially the cutest, most vivacious and enthusiastic we've seen in ages, are honeymooners from Madrid, Spain. They've been married for exactly one week, and I sensed that they neither knew of the algae nor would they particularly care. :-) They're having such a good time! 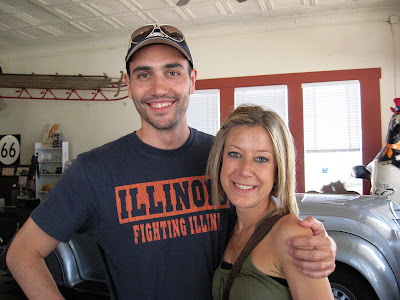 These kids and their parents from just down the road in Claremore, OK were more interested in the squashed penny machine than in whether or not they could swim in the lake today. 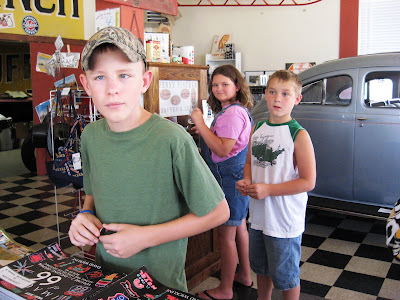 David Backlin, a Route 66 friend from Ft. Smith, AR was on one of his numerous trips on which he explores various back roads in the area. He's particularly interested in photographing out-of-the-way bridges on Route 66 and elsewhere. It was nice to have him drop in so we could finally get to meet him in person. 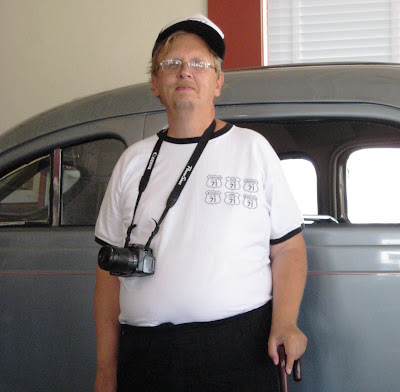 Ron M. was in Afton with me today, and at times it sounded like a tuberculosis ward, with both of us hacking away as we are recovering from our colds and respiratory distress. I think I'm finally at the end of my summer siege. I hope.

I must mention the bravery of those who traveled today. Here's the temperature on the car thermometer as we left Afton this afternoon.