This may be Oklahoma, but the corn definitely isn't as high as an elephant's eye this summer. It about as high as the eye of a newborn calf, and it's getting brown and dying on the stalk. The soybeans don't seem to be doing much better. This incredible drought and hot spell is taking its toll. The cows are huddling in the shade whenever possible. We see these particular ones gathered in the shade under two billboards, fighting for space, every day when we're heading home from Afton Station. 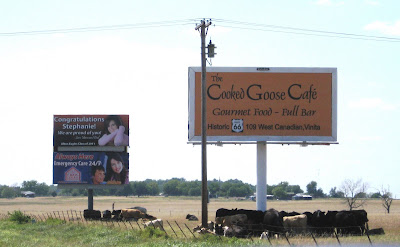 Other cows are wading in quickly-evaporating farm ponds to get a little relief. Even the horses seem unhappy. I expect to see Tom Joad and his family heading west any minute!

The weather is also taking its toll on travelers, I think. It's hard to believe that I only had three (count 'em, THREE) visitors to Afton Station all day today, in the middle of July! 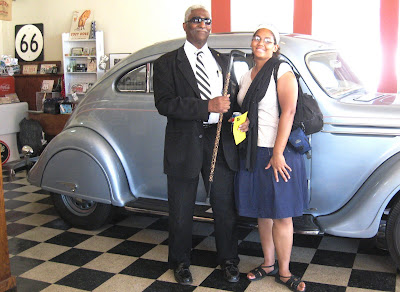 This morning's first visitors were this very distinguished preacher from St. Louis, MO and his daughter who is just one year out of college. They chose Route 66 for their path from Texas to St. Louis and they stayed at the Station for quite some time while we chatted, mostly about trains. Preacher Wyatt is a great fan of train travel and he told me about his recent trip on the Texas Eagle, one of the few luxury passenger trains left in America. Now I really want to take a ride on it myself!

The rest of the day was totally devoid of visitors (except for a quick drop-in by Robin and Phil) until late afternoon when a gentleman wandered in and didn't stay long because he was on his way to the new auction house next door.

But all is not bad news by any means! I joined a newly-formed Facebook page called "Afton, OK Group" and found myself among a talkative group of Afton old-timers who are concerned about Afton's shabby appearance of late. Over the course of just a couple of days, we've made plans for an "Afton Route 66 Clean-Up Day", to be held on Sat., Sept. 3. Cleaning up 1st Street (Route 66) will be the first priority, although other property owners will be urged to spruce up their own parts of town. A very enthusiastic and energetic lady named Rhonda has taken the reins of the committee. A gentleman named Ted and I are the other two committee members. Although I've never met these two in person, we've communicated enough to plan a full day for the 3rd, including free food at Afton Station all day for those who participate, a band concert in the park at the end of the day, and a list of local groups who have already been contacted (thanks to dynamo Rhonda) to help out on the day. The town needs far more than just a one-day cleaning, but with luck, the pebble we toss in the water will send ripples all across town. I hope some of my Route 66 friends will come out to help beautify a small, previously neglected piece of Route 66 too. 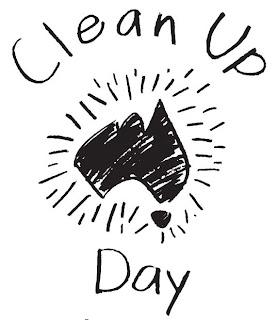