I try not to voice my disappointments about Afton Station on this blog. I try to keep it upbeat, and I'm lucky because nearly every day at the Station gives me that upbeat feeling. Today was somewhat of a downer, although it started out to be very, very nice.

Ron M. was with me today, and shortly after we arrived, so did Tattoo Man, sporting his latest tatton on his stomach. 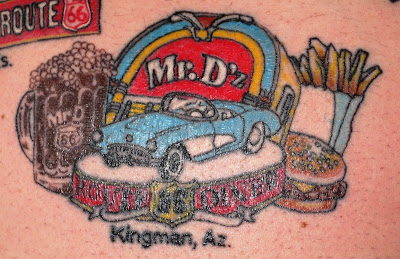 Next came the guest of honor of the day, Kathy Anderson from Edmond, OK. We'd planned to meet today so that she could give me a large supply of t-shirts to sell here at the Station. It's always great to see Kathy, and although I've resisted selling tees, I couldn't resist taking over a couple of her designs, in both tees and sweatshirts. 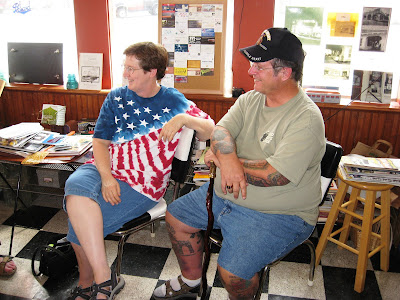 I now have them in all sizes and three colors, and they're on a special sale at only $10 per shirt and $22 per sweatshirt. (The second photo shows the back of the shirt.) 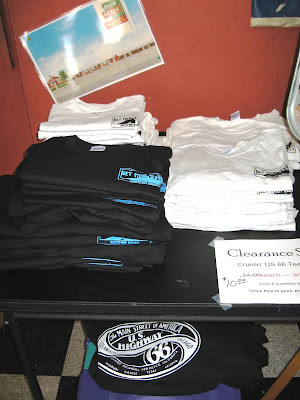 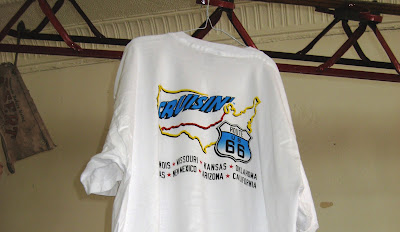 While we were sorting the shirts, Robin and Phil dropped by and Phil brought his cast with him. It was replaced a couple of days ago, so he finished painting the Route 66 map on it and presented it to Afton Station. It now hangs on the wall here! 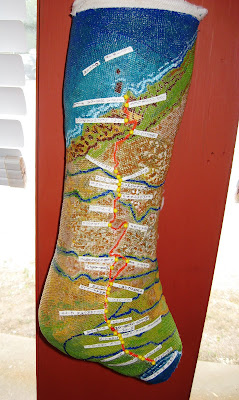 After that, the day went somewhat downhill. It's uncompromisingly hot, and that's stalling out tourism around here. . . a lot. We only had 6 visitors today. Nobody bought a thing. That, coupled with the $390 electric bill (for air conditioning these three big showrooms) which I received yesterday, has really bummed me out. I don't blame tourists for not wanting to get out of their cars in 105-degree weather, but seeing all of them slow down, snap photos, and move on can't help but discourage me. In reality, we've had more visitors this month than we had last July, but most of them came at the start of the month. Right now, it's slim pickins'.

Our brave and friendly visitors today came from Bella Vista, AR and Collinsville and Grove, OK.

Tomorrow is another day, and I feel sure I'll revive. Stop by tomorrow and I'll prove it.

Afraid the old 'Misery loves company' adage doesn't help much when comparing electric bills during this heat wave. Chin up, Laurel. Better days (and cooler ones) are coming and so are hundreds of enthusiastic visitors.

Hope you get some more visitors soon.

We'll get this stupid heat wave outta there soon and things will pick up!

Have you considered doing what places like the Round Barn and Seaba Station do? The have a place for donations. If someone can't afford, of just doesn't want, a shirt or a book, they still might throw a few bucks in a donation bowl.

I do have a donation jar in a prominent spot on the counter next to my guest book. It manages to collect several dollars each day, and every little bit helps.