Since I've abandoned Afton Station for a while (not by choice, of course) and put it in the hands of Robin, I'm getting daily communication from her about what's going on there.  Yesterday a large shipment of merchandise arrived, so she was busy putting it out, pricing it, etc.  This is, of course while a steady stream of Route 66 travelers is coming through the door.   She's doing a good job for me, and today she even sent some photos she took.

Here is a honeymoon couple, Guy and Helen Lancaster from Wales, UK.   They have been married for only a month. 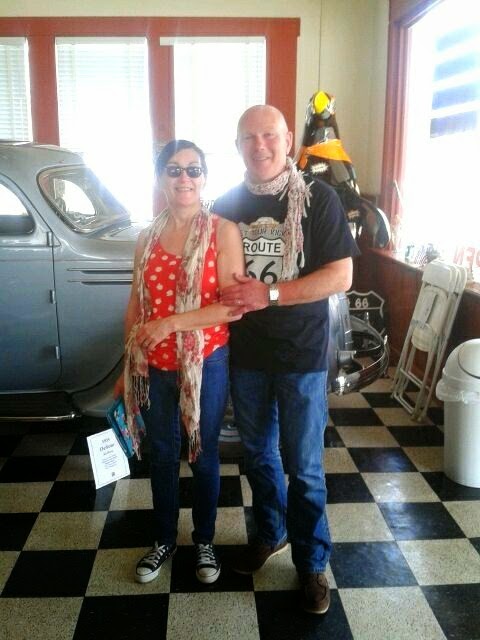 They are traveling with this group from the UK -- Ireland, Wales, and Scotland. 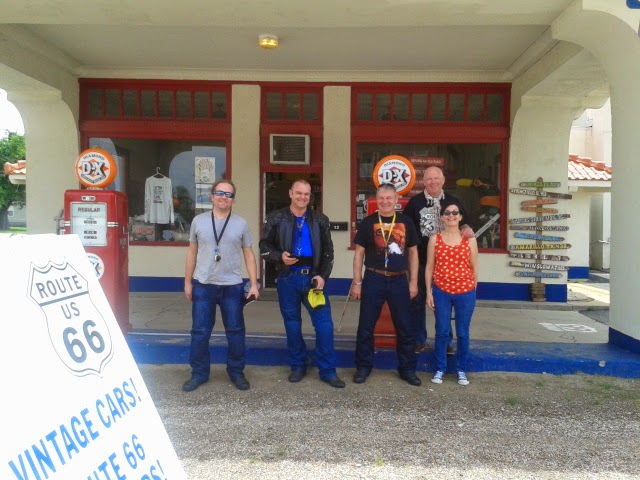 There may be a few times that the Station will have to be closed for an hour or two while I'm away and I've instructed Robin to hang a note on the door if she has to leave.  It won't happen often, but I don't want anyone to be disappointed.  Chances are she'll be back shortly.

Meanwhile, Ron M. and I are doing our part to tell folks about the wonders of Route 66.  I have a pile of Oklahoma Route 66 Association Trip Guides in my room which I hand out to anyone who will take one.  I've had nice visits from some Route 66 folks, too -- Marian Clark, LaSandra and Brad Nickson, and our dear Tattoo Man.  Route 66 is alive and breathing even even here at rehab!
Posted by Laurel at 2:14 PM

Good girl, that Robin! Know your recovery will be better/faster since you don't have to worry about the Station. What's your address and are there hours for visitors?

Yes, Robin is doing a great job on such short notice. I'm proud of her.

I'm at the Villages at Southern Hills, Susan. Not sure of the address, but it's near Lewis and 56th, I think. Twenty-four hours open for visitors. Would love to see you but I certainly understand your busy schedule at this time of year.

I am the world's worst about sending cards. In your case, I keep saying, I bet she is no longer at rehab. So excuse my laziness and check Facebook. ;-)

Hi Laurel, was lovely seeing the honeymoon couple from Wales - that's where I am from originally. I'm just stopping by to say how delightful your blog is. Thanks so much for sharing. I have recently found your blog and am now following you, and will visit often. Please stop by my blog and perhaps you would like to follow me also. Have a wonderful day. Hugs, Chris

Thanks for posting the address of this place. Although it's not far from my home, since I arrived via ambulance I'm a bit disoriented as to where it is. I hope the posting of the address will encourage folks to drop in for a visit. And also, thanks for your well wishes.

Chris,
Thanks for the kind words about my blog! It makes me feel so good to know that people read and enjoy my writing. Although I'm now stuck in this Physical Therapy rehab place, I can't wait to get out and back to where I belong -- Afton Station!
I looked at your little Blogger bio but couldn't find the URL for your blog. Please send it to me so I can check it out and follow you. Thanks!