Law Enforcement in the Afton of Old

I've mentioned a number of times my intense craving for good stories about Afton Station in "the olden days".  When I approach local folks of a certain age for their recollections, the common answer goes something like this:  "Aww, it was just a filling station.  Nothing exciting ever really happened at filling stations."  And yet I continue to ask, always hoping that a memory pearl will fall from someone's mouth into my outstretched hand.  Well, today it did!  It's not a story of adventure or excitement, but simply a fleeting vignette, something that happened one day to one person at Afton Station way back when it was still called the Eagle Service Station and was still fulfilling it's original purpose of taking care of the auto needs of locals and Route 66 travelers.  But for the person to whom it happened, it has lingered in his mind for decades.

Shellee and Jim, two thirds of the amazing writing team of Ross, Graham, and McClanahan (authors most recently of "Route 66 Sightings", that gorgeous coffee table tome full of beautiful photos, poignant essays, and thought-provoking bits of Mother Road knowledge) received the following email from a fan of their book.   When Jim read the email he knew I'd appreciate the story so he sent it along to me.  Here it is, exactly as a Mr. Darrell Davis remembers a particular day in the early '60s. . .


I received a copy of Route 66 Sightings as a Christmas present from mydaughter and I wanted to share a couple of my thoughts with you. The bookis beautiful and brings back many memories.
I could offer many stories about life on Route 66 but I have one thatrelates to page 132 in the book; the DX station in Afton Oklahoma. I grewup on Route 66 outside of White Oak Oklahoma, between Vinita & Chelsea. Oneweekend in the early 1960’s I was to meet a friend of mine at Grand Lakeand spend the weekend fishing. I got off of work at the Glass HouseRestaurant in Vinita and proceeded up route 66 toward Grand Lake. Cominginto Afton I knew I needed oil for my 1953 Ford so I pulled into the localDX station. As I was getting out of my car the service station attendantwalked briskly up to me. In those days service attendants wore khakiuniforms including a flat topped, flat billed cap. I said to him, I need aquart of 30 weight. He said to me, “you know’ed you run it, you know’ed yourun it.” I didn’t understand so I repeated my request and he repeated his,“you know’ed you run it.” I looked around and slowly realized two things,one he was not an attendant but rather the local police officer (note theuniformed troopers on page 20 of your book and you will see the uniform)and two, I had just ran the towns single stop sign while pulling into thestation. As the officer proceeded to write up my ticket the stationattendant, dressed basically the same as the officer, did show up and tookcare of my oil issue. Interestingly I was instructed to go down the streetto a small café where I paid a $2.00 fine to the man doing the cooking. Inyour book you stated that Afton does not have a stop light. In the early1960’s it had one and I ran it. 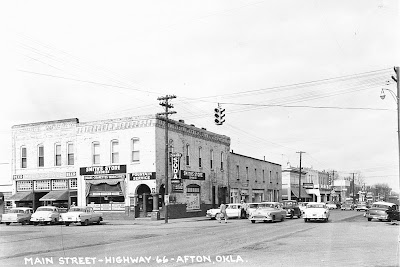 Yes, Afton did have a stop light back then.   The only photo I own that shows it is this one.  We often say we wish there was a stop light at the corner of First and Main now, as it would cut down on the vehicles (mainly the 18-wheelers) that roar through town without regard to stray dogs, zombies, or Route 66 travelers slowing down to turn into the Station.  It's unlikely that there will ever be another stop sign or light in the town, however.  Mr. Davis, I'm sorry you got pegged for a $2 fine and I hope that the indignity didn't spoil your fishing trip.  I'd love to meet  you some time.  If you still live anywhere near northeastern Oklahoma, won't you please come for a visit?  But keep it under 30 mph because we still have an officer of the law that sometimes hides and pounces on unsuspecting speeders.
Posted by Laurel at 12:24 PM

Great story. I hope you and Mr. Davis get to meet or at least exchange emails. I bet he's got at least another story or two.

A story that made me smile and no doubt encourages you to think that there are many more stories to be heard. It's not so hard to understand why you make the long commute to Afton Station.