This is my first day out of rehab and trying to resume normal activities. I admit that I'm a little wiped out so I just came home to rest.  When I face my full email box and then realize that I really need to write a blog post, it all seems like more than I can handle.   Give me a few days and  with luck I'll be back in the groove.  Of course, I haven't been to Afton for nearly a month so I don't have much to say about what's going on up there, other than what's been told to me.

The barbecue place down the road is now open, and so far I've heard good things about it.  I've already tasted their bbq and sides, and both are wonderful.  If you plan to stop there, be warned that it's a little hard to see from Route 66.  It's in an old gas station on the south side of the road  (north of Afton Station), but the defunct pumps have been boxed in rather than removed, meaning that the restaurant is somewhat hidden behind the big gray box holding the pumps.  I'm not sure if there's a sign up yet.   I hear they're open from 11 a.m. until 9 p.m. or later.  They serve beer.  This is all I know, so I  hope this information is accurate.  If you are passing through Afton, do think about stopping to patronize this spot -- the barbecue is delicious and the owners are friendly. 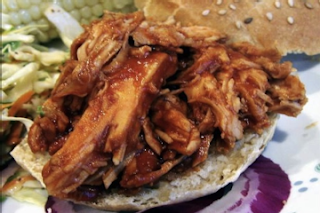 ADDED LATER:  I found this message from Sandy Reynolds, one of the proprietors of the new place, on Facebook.  She writes:  "Opened NOWHERE ON ROUTE 66 this Fri! Had a great first weekend. Sold out of everything and wasn't expecting that. I hope everyone that came in was pleased. We have a few kinks to work out but I think all in all it went great."  I also found out that I was wrong about the hours.  They're open later at night and will stay open as long as necessary for those who come in to have a beer or two.
Posted by Laurel at 2:43 PM

Atta girl, Laurel. Keep getting better. Baby steps if necessary. Now that you're blogging again--an Afton restaurant review certainly does count--the world will start to seem back in balance.

Sounds awesome, hope they do great.