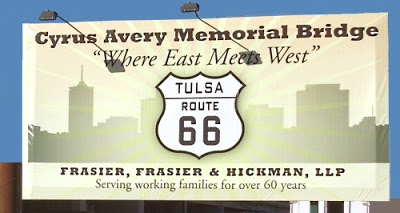 This sign has been erected on the west end of the Cyrus Avery Memorial Bridge in Tulsa.  For those approaching the bridge from that direction, it's impossible to miss.  It was sponsored by the law firm of Frasier, Frasier & Hickman, whose offices (not even slightly coincidentally) are just a few feet from the sign.  Despite the obvious bit of promotion, the sign is still very well designed and undoubtedly will be helpful to those entering Tulsa for the first time and getting their bearings amidst all the attractions available for Route 66 travelers in our city.   Furthermore, next to the sign is what remains of a closed, ceramic-faced Cities Service filling station, a throwback from the '60s when Cities Service moved its headquarters to Tulsa (1968 - 1982).  The station, which was built in 1926, was placed on the National Historic Register in March of 2011. 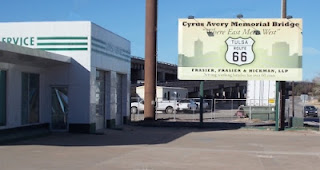 After shooting a couple of photos of the sign, we continued on Route 66 westward to Depew, since the little town has been getting a lot of chatter lately on our Route 66 Yahoo group.  Depew was the first town to be bypassed by Route 66, and it remains "off the beaten path" on a rise south of the more traveled alignment.  I've been to Depew many times, but just wanted to take another look at it, and besides there wasn't much else to do on this gorgeous springlike day in January, so a Route 66 jaunt seemed appropriate.
Posted by Laurel at 11:29 AM

Good on Frasier, Frasier & Hickman! We can use all the well done 66 signage we can get on this end of the 26 miles of Route 66 that wind through Tulsa.

Laurel, do you know, who owns the restored Cities Service station? When they finished the work I was hoping to see someone move in, bring it back to life and take care of it. It just sits there with windows plastered with bits of paper!??!

Susan -- Apparently it is owned by the Frasier law firm, too.

I've been happy to read more about Depew. I was quite taken with the little town, and it appeared that there was a beautiful strip of original 66 running right smackdab down the middle of town.