Granted, architects are undoubtedly much better than the rest of us at visualizing something beautiful and practical being made from something old and unattractive. The firm of ElevenTH did just that when they found an old, long-defunct gas station on Route 66 in Tulsa, which they subsequently purchased and restored as their new architectural office space. 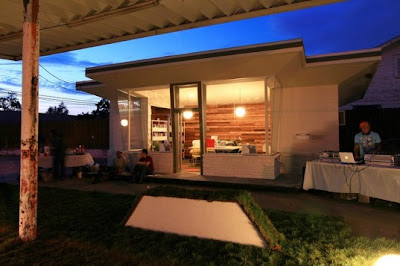 The website "Inhabitat" says: ElevenTH knew they didn’t want to be holed up in some stale office on the 13th floor of a high rise in downtown. They wanted to be in the midst of the city, “the homeless, the prostitutes, the reality of society, all things this building was witness to,” as Shane Hood, principal at ElevenTH told us. So they searched for a place they could make their own and jumped on the chance to repuporse a 1950′s PEMCO gas station on route 66 into their new offices. The former gas station had fallen into quite a state of disrepair – boarded up, leaking and “had been on the unfortunate end of many unwise and insensitive remodels”. 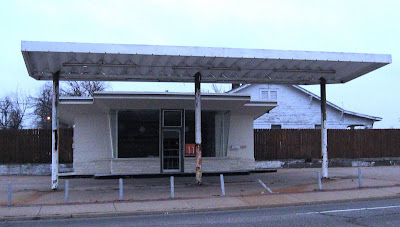 All of this got me thinking, as I often do, about all the deserted buildings along various alignments of Route 66 in Tulsa. So this morning, at first light, I was on the road with my camera. The following photos were taken in a mere 25-minute loop of 11th Street and Admiral. You don't have to go far or search diligently to see that plenty of memories of our past are lying in ruin along the Mother Road. My wish would be that more folks would consider repurposing existing buildings. It has worked very well for us at Afton Station, and along with having a pretty neat place to work, we also have a sense of satisfaction that we've perhaps preserved a few memories along the way. 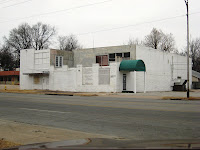 This empty building has some deco touches. 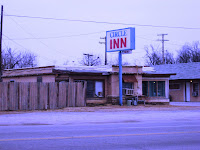 How about an old motel? 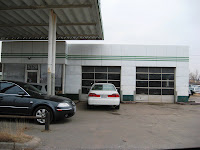 Nobody seems to be using this vintage enamel-faced filling station 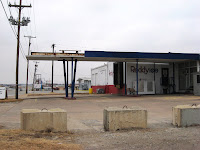 Gas station with a big canopy, sort of Googie looking 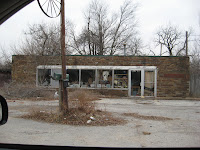 This was once a grocery store. Some years ago, I met the daughter of the original owner. 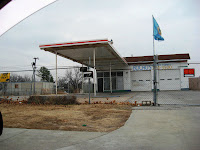 Another gas station with a great canopy. 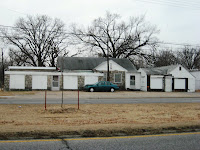 All kinds of space. May have once been a home. 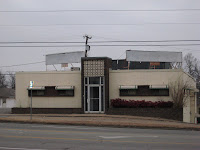 More deco
By the way, yesterday's summer temps are long gone. It was cold and windy this morning and now we're expecting snow Wednesday night. Just so you know.
Posted by Laurel at 9:11 AM