No noisy air conditioner today at Afton Station.  The cool air has arrived, and it's much more pleasant to listen to the train whistles and truck brakes than the deafening rattle of the a/c.  I like autumn.  Wish winter didn't have to follow.

In an entry I'll post later today, I'll tell you all about the very neat Blue  Tie Affair at the Blue Whale which we attended last night, but now I'll just report on the goings-on at Afton Station.  There were 22 visitors, including. . . 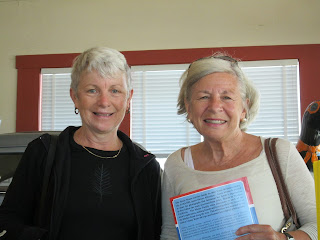 . . . these sisters who met on U.S. soil in order to travel Route 66.   One is from New South Wales, Australia, the other one from London, England.  What a neat way to carry out a sisterly reunion! 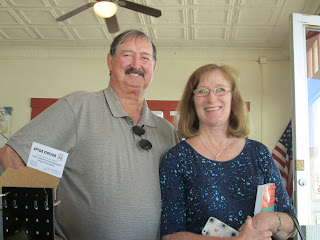 This couple from Victoria, Texas is traveling Route 66 near his 66th birthday.  Additionally, he has a '66 T'bird at home but didn't bring it on this trip.  Congratulations on all the 66's in your life!  (He's one of ten kids and did a lot of cotton picking on his family farm as a kid.  I wish they could have stayed longer because I'm thinking he must have lots more interesting stories of his childhood. 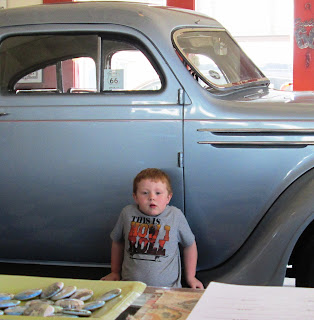 This young man was brought to Afton Station by his grandpa from Afton.   He has found a perfect use for the running board on the DeSoto!  Cute little redhead! 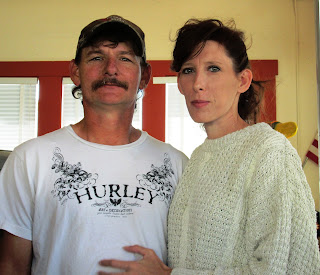 And finally, these two from Anadarko, Oklahoma beat all records we've been keeping on honeymoon couples.   They were married just one hour prior to arriving at the Station!   They came straight from the wedding chapel in Miami to Afton because he loves old cars.  We are honored that this was their first stop on  what we  hope will be a long and happy life together.

Tune in later for my report on the Blue Whale event.
Posted by Laurel at 3:36 AM