Afton Station greeted 15 visitors today, but for some reason it seemed like far fewer.  It was fairly relaxing, and toward the end of the day became  rather somber after hearing about the tragic event at the homecoming parade at Oklahoma State University when a car plowed into the crowd. Such bad news.

Four friends from  San Francisco and England were first in the door.   Can't you tell from their smiling faces that they are enjoying their Route 66 visit? 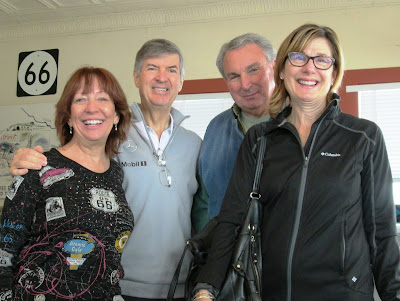 Ron "Tattoo Man" Jones came to visit for a while today and parked his Stallion trike right at the front door.  Later in the day, we looked out and saw a husband and wife eyeing the trike rather closely.  When they finally came in, the gentleman asked who owned the vehicle.  Tattoo Man was on the phone at the time, so I answered that it was "that fellow over there". " Well", the gentleman said, "I was just wondering why he has MY name airbrushed on the back of his bike."  What?  Ha ha... turned out that his name is Ron Jones, too!  So, we had a meeting of the Ron Jones's, and here they are! 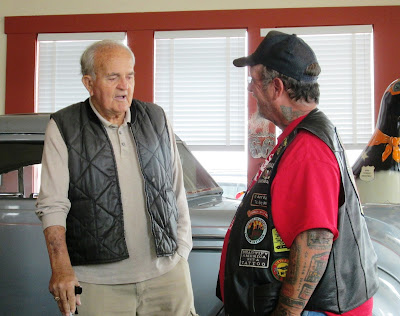 It was slightly chilly today, a possible harbinger of the winter weather to come.  It wasn't cold, just a little cool wind that smelled of autumn.  The trees aren't really turning color yet, or maybe not at all this year since things have been so dry around here.  We shall see.