I was browsing through former blog posts and realized that January seems to be my time to do a lot of aimless roaming.  It makes me wonder about the definition of what we call a "roadie".  In order to be a roadie, must one stick to long jaunts on old country roads, or are those of us who just want to be behind the wheel of a car at all times no matter where it's going, eligible for the title, too?   I don't care where I go, as long as I'm in my car.  This morning I set out at 6 a.m. to grab some breakfast and came home after 11 a.m..  Where did those 5 hours go?  I didn't venture beyond 20 miles past  the city limits of Tulsa, but I didn't really drive around in circles either.  My car is my cocoon, and even on a cold, blustery day like today it is cozy, warm, and comfortable.  Although I'd generally prefer to have company, I don't mind traveling alone either.  Today, I was alone..

Tulsa is such an interesting city, always full of surprises.  Today I tried to stay away from downtown, since tonight's Garth Brooks concerts (two in one night) are already causing snarls around the arena where our hometown boy Garth will be performing.  I had no worries about wasting gas since Tulsa  has the lowest gas prices in the country. Its nice not to worry about that for a while, although I know it will change before long. 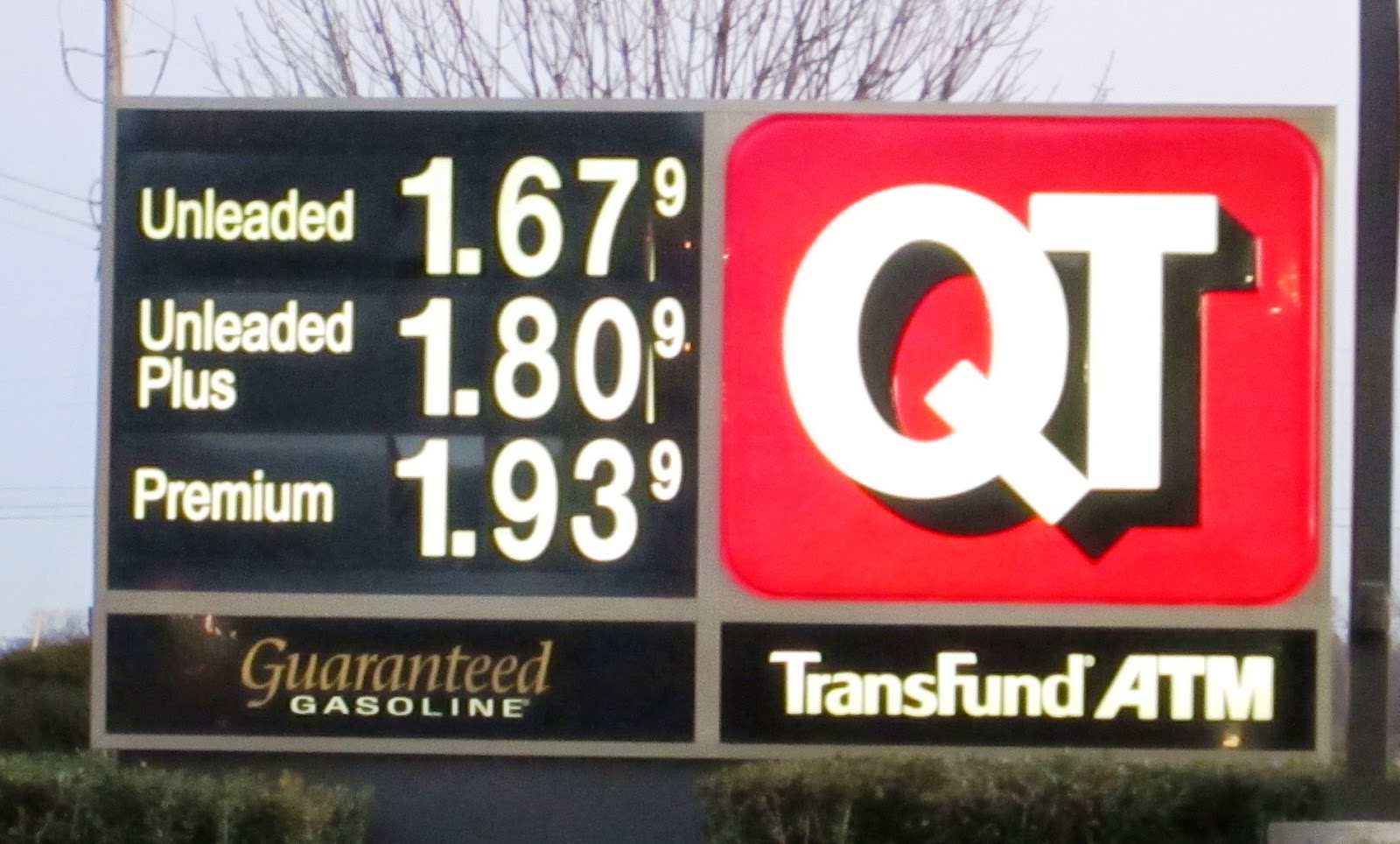 Tulsa is known as the Art Deco Capital of the USA, and there are plenty of signs of that all over the city.  I decided to check out a few this morning.  I suspect I've posted photos of most of the following buildings at some point in the 6 years I've been doing the blog, but I tried to get some different angles this time.  My camera was acting up, but here are the results of my morning wandering. 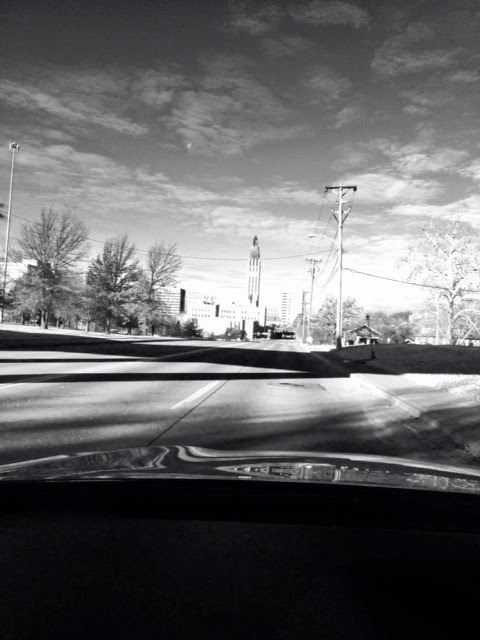 From 11th St. (Route 66) far in the distance, you can barely see the spire of the Boston Avenue Methodist Church, built in 1929 and designed by local architects.  It is considered one of the most important Art Deco examples in the world. 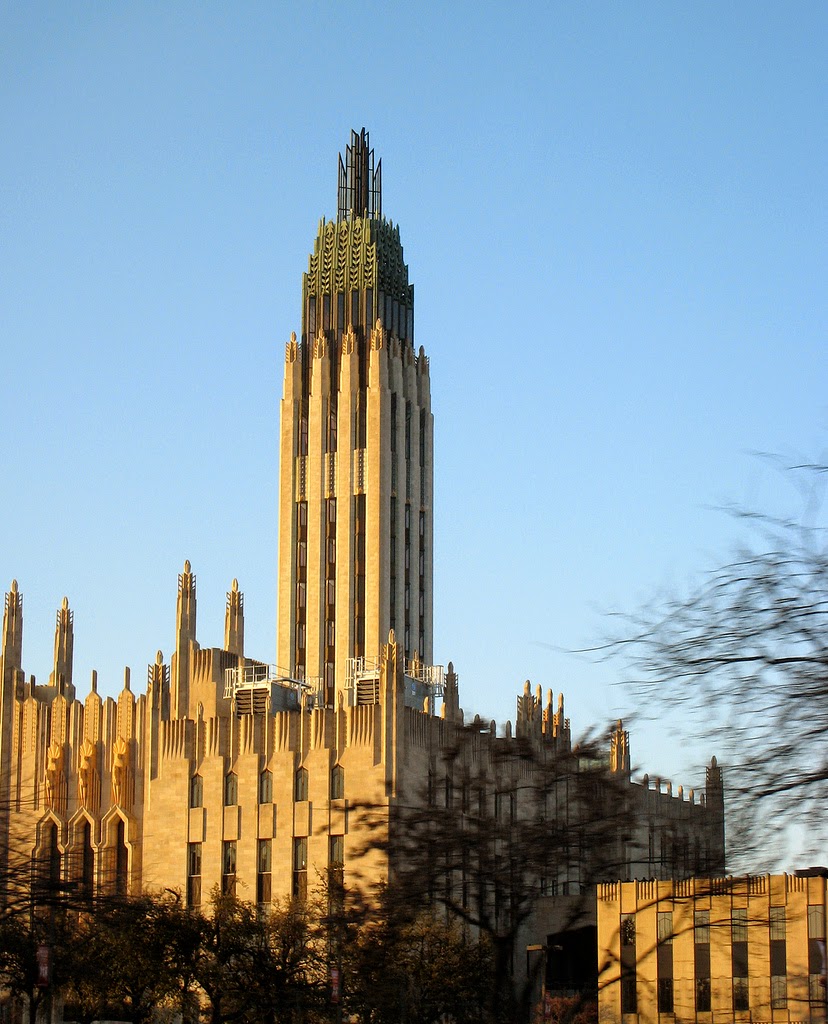 In 1938, the Warehouse Market building was built, also in the deco style.  It was quite an elegant facade for a grocery warehouse, and it still stands, broken up into several stores now. 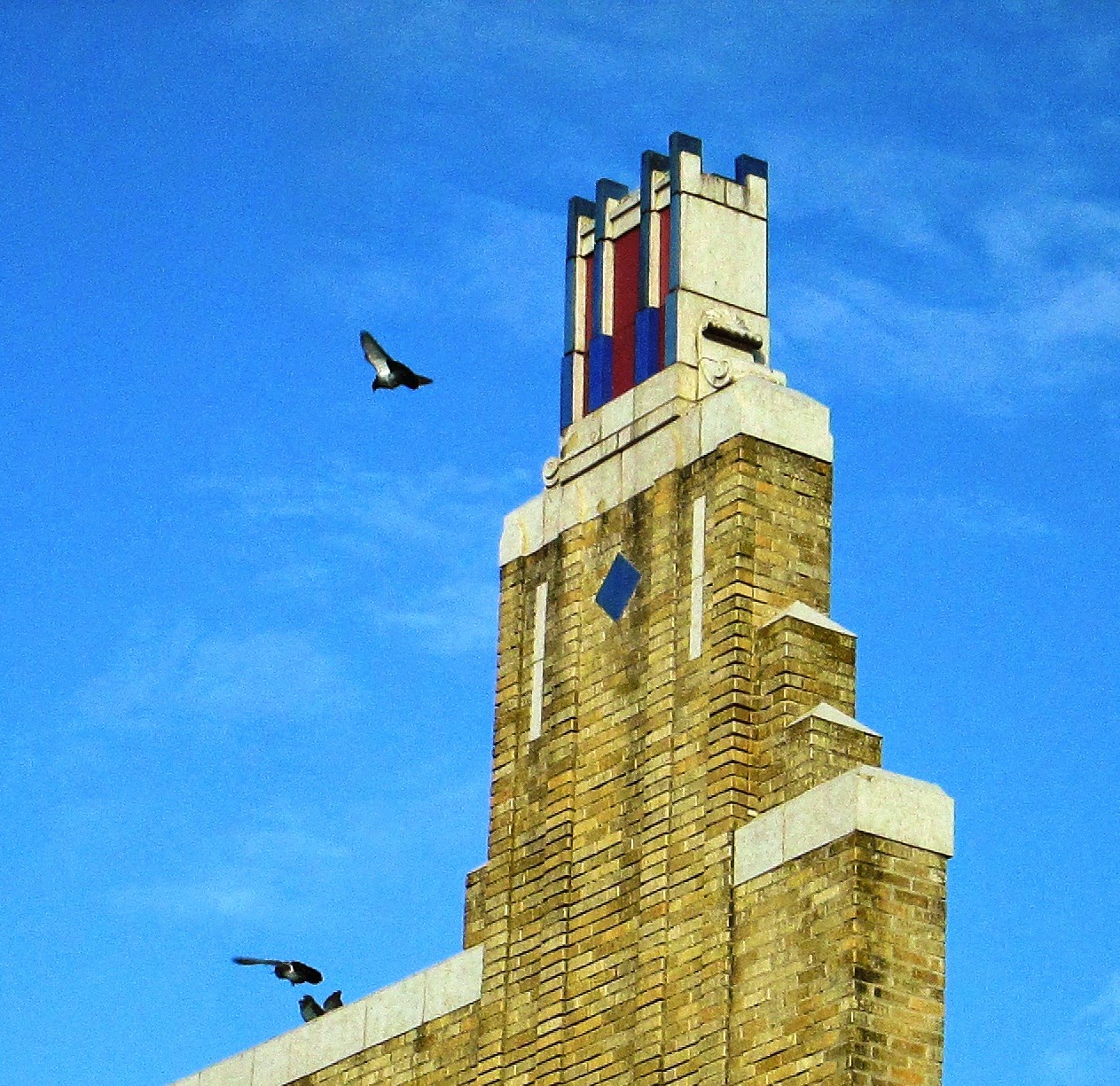 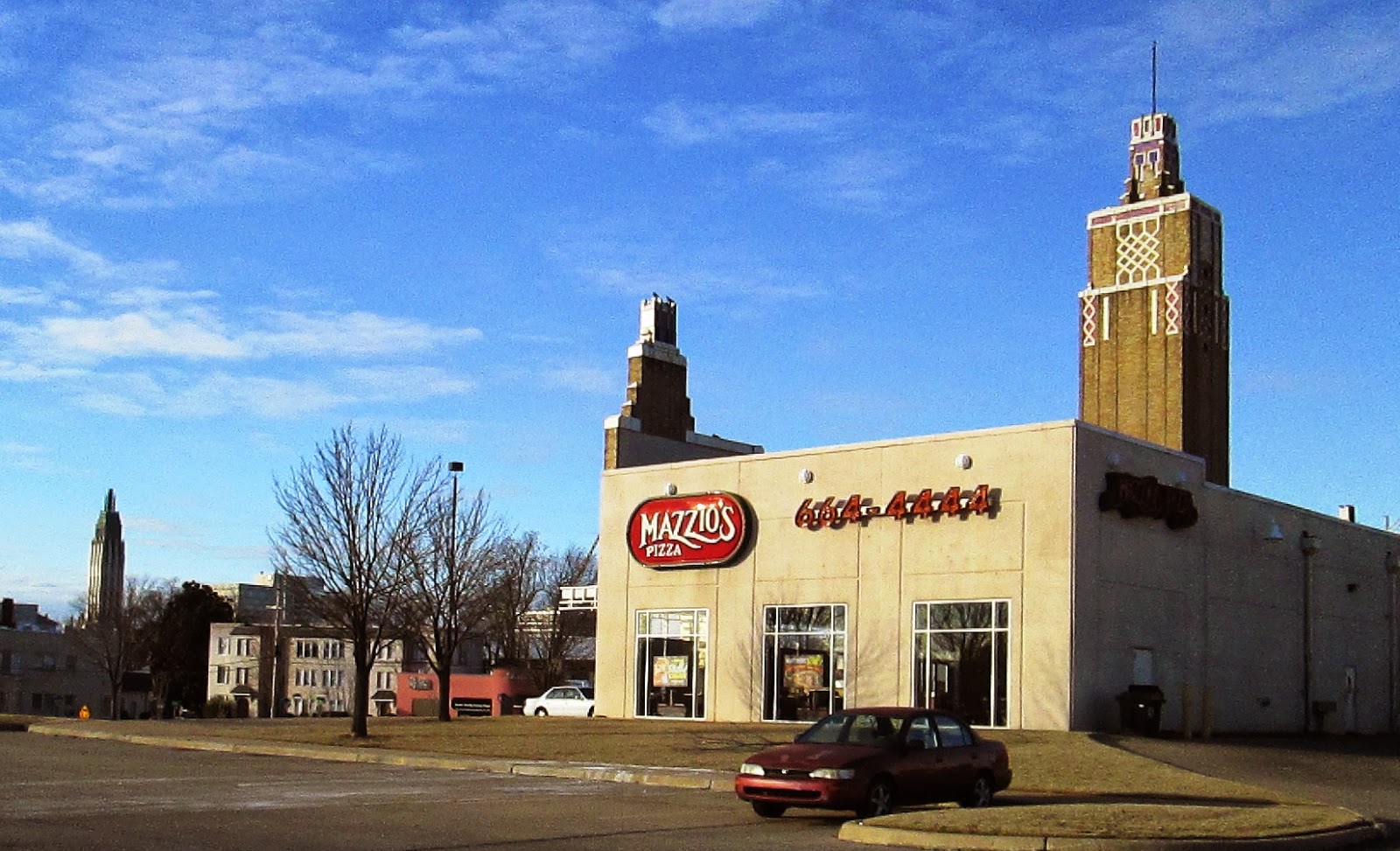 Here you can see both art deco steeples at once.  They are less than a mile from each other.  And then, if you turn in the other direction, you see something very unusual -- a recently built Home Depot store also incorporating the Deco style.   Since it was built so close to the iconic Warehouse Market Building, Home Depot agreed to add some touches from the same era.  I find that rather amazing, and I'm sure there's a good story to accompany that development, but I don't know what it is. 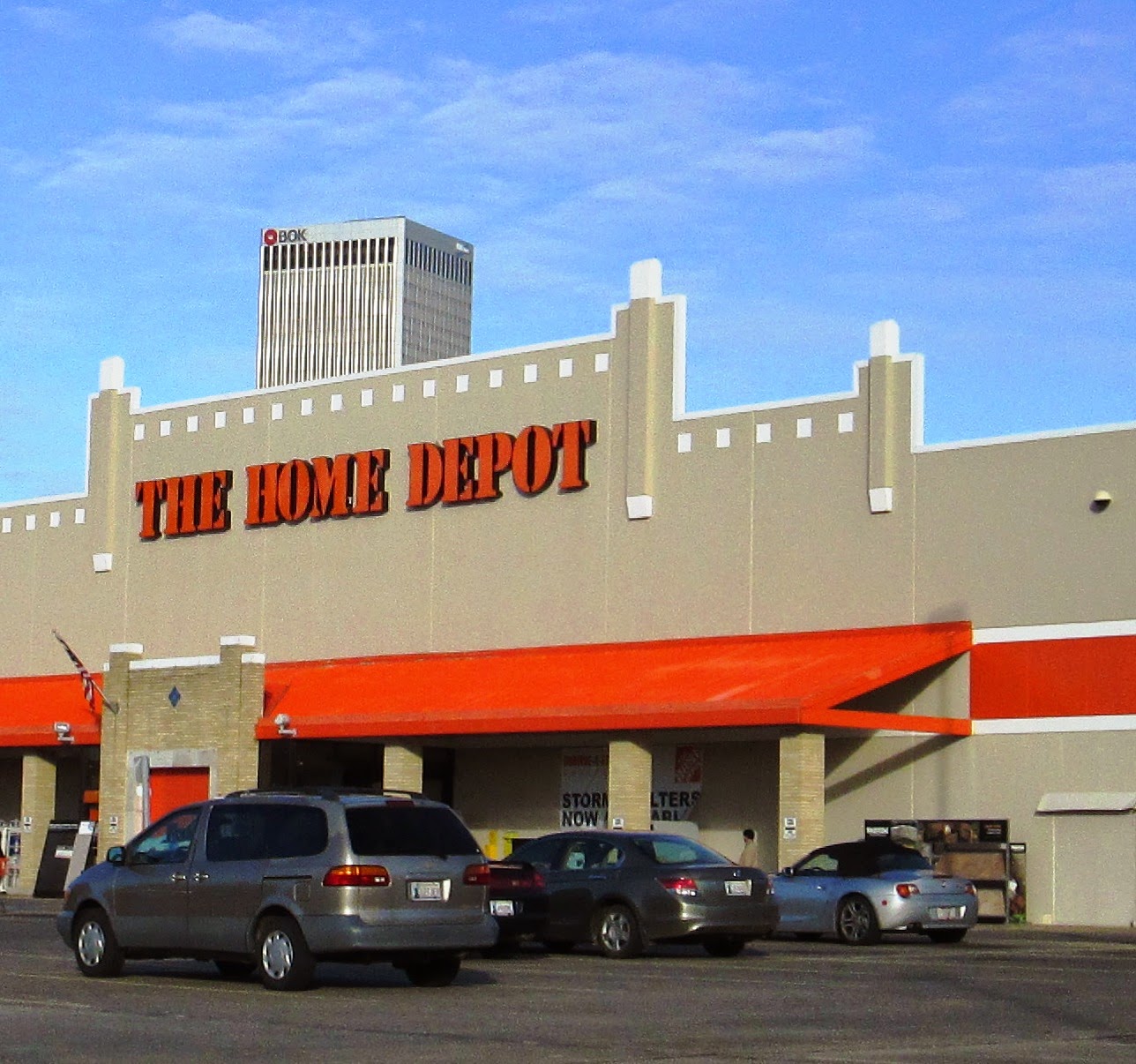 Across the street from the Warehouse Market Building is a small deco gem that is now a dry cleaner. . .

. . . and from the same vantage point, deco skyscrapers in downtown Tulsa can be seen in the distance. 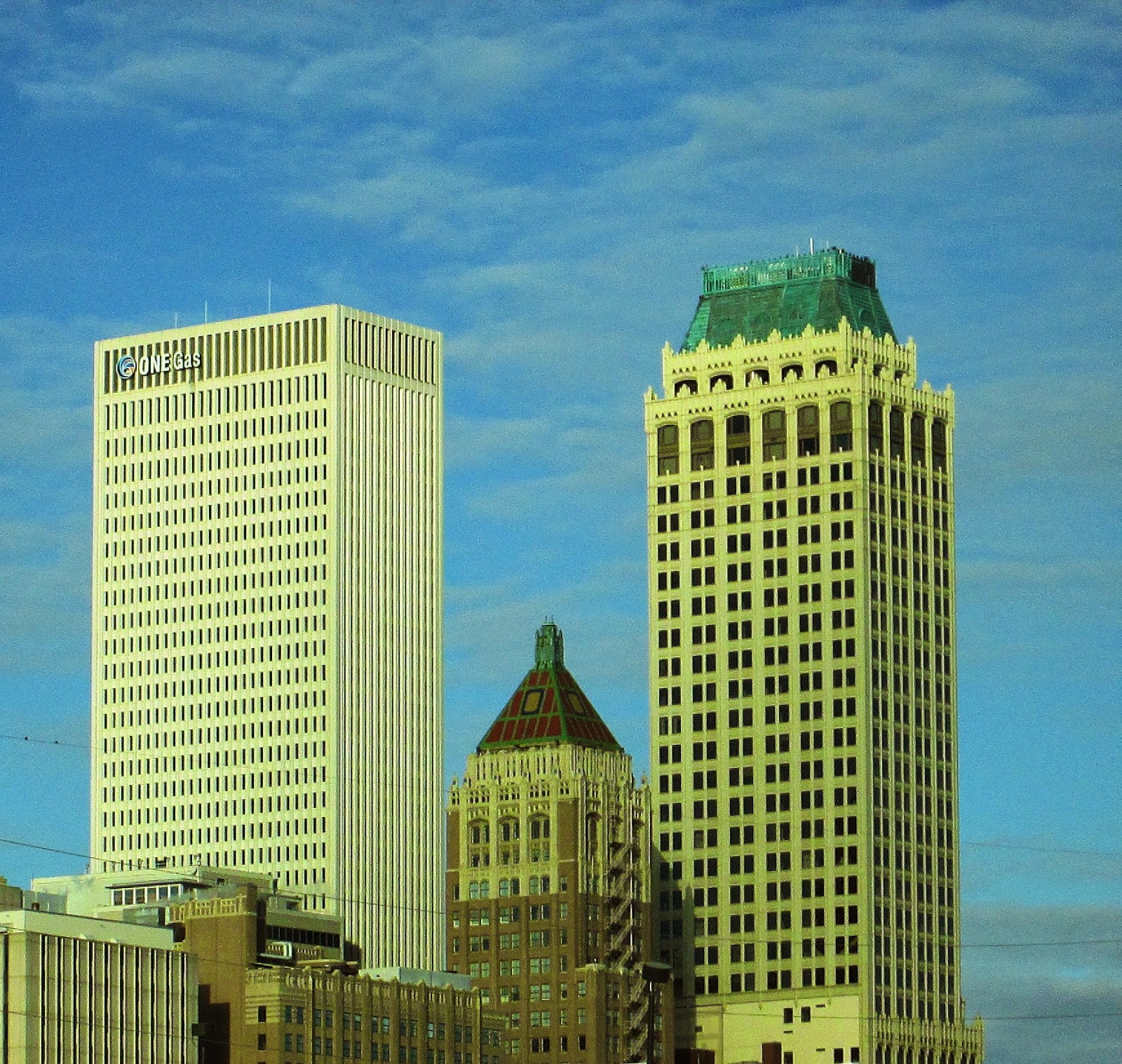 This is just scratching the surface of the multitude of beautiful architectural examples in our town.

Today, the New York Times declared that Tulsa is the 47th best city for travelers in the WORLD!  This is great news on many levels, but our Art Deco heritage surely affords one interesting feature for travelers.   That and Route 66.... two perfect reasons to stop in this great Oklahoma city!

ADDENDUM:   Susan Yates tells me that Tulsa was among only 13 of those "best places to visit" that are in the USA and included Yellowstone National Park, Lower Manhattan, and Orlando.  Now, that's really saying something!!!!!
Posted by Laurel at 3:10 PM

Interesting post and nice photos, as you said, not the usual angles. That NY Times list of 52 Places to Visit in 2015 only had 13 places in the U.S. and Tulsa was in there with Yellowstone National Park, Lower Manhattan, and Orlando! It was a beautiful day to get out--if you could stay warm, which thanks to your trusty car you could. Thanks for sharing your outing.

Susan, see the addendum to my post. I appreciate your further information.

I enjoyed your Tulsa images -- I really like the B&W! That's where we were heading via RT 66 from Springfield, the day we found your station. We try to road trip somewhere at least one Saturday or Sunday a month. Thanks for sharing you images. :--) joe