The insides of the old gas pumps were installed yesterday, thanks to Marly. Since I have zero knowledge of the terminology for what I'm talking about, I'll describe the innards as the rotating cylinder mechanisms that indicate gallons, price per gallon, and total price.  We decided to set them at 12 cents per gallon, since that's what gasoline was selling for in the 1940 photo of the Station I have.  I hope folks realize these are non-working pumps.  Otherwise there's danger of them causing a traffic jam. :-)

It was a slow day today, with only 6 visitors, total.  They all showed up before noon, but the afternoon was lovely because Betty stopped by and spent about an  hour here.  I'm learning so much about the history of Afton from her.  Tommy Bassett owns the remains of the old Avon Courts, the shells of the three little cabins on the west edge of town.  Tommy also owns the little mom n' pop grocery ("Since 1922") across the street, and comes over sometimes just to chat.  He came over to see if I had a postcard of the Avon Courts in their heyday, and I do!  The faded black and white card isn't the best by any means, but it does reveal that the original Court had about 8 cabins with carports in between.  I was elated to hear that Tommy wants to restore at least one of the units and fit it with an old '50s TV, furniture, and of course an ugly picture on the wall.  Great news... I hope it really happens! 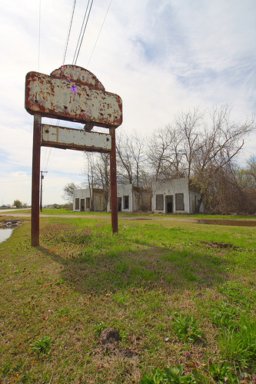 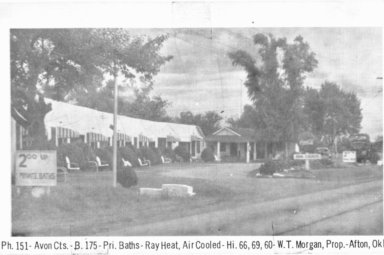 That is AWESOME news. Tell him to be sure and call me if the preservation committee can be of help. What we lack in money and skill we make up for in enthusiasm. :)