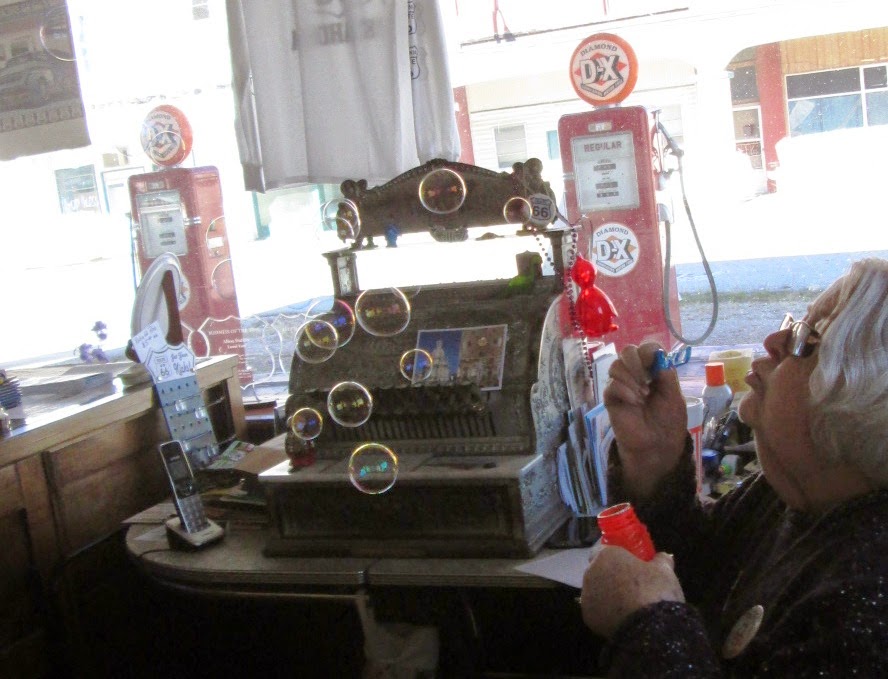 On any ordinary day at Afton Station on Route 66 in Afton, Oklahoma the last thing I'd be doing is blowing bubbles. However, I must have had a premonition of a slow day to come when I went to the grocery store early this morning and bought a bottle of what, as kids, we called "bubble stuff".  Like most things, bubble stuff has changed, and this particular bottle was touted as being "Glowing Neon".  Sadly, there was more than enough time for Ron M. and me to blow all the bubbles we wanted, because visits from travelers were quite sparse today.

We had six visitors, 5 folks to view the vintage vehicles and a local fellow who cruises through in his artificial flowered hat a couple times a week to pick up anything we happen to be giving away free that day. Two guys who repair cars at a dealership in nearby Vinita stopped in to waste a little time when they were supposed to be taking a car on a test drive.  A gentleman from Welch, OK brought in his two friends who are visiting from Fresno, CA.  And that, my friends, was the sum total of our visitors for the day.

Ron took the camera and disappeared into the back room, where he took some photos of various autographs on our signing wall.  Here are a few of them.... 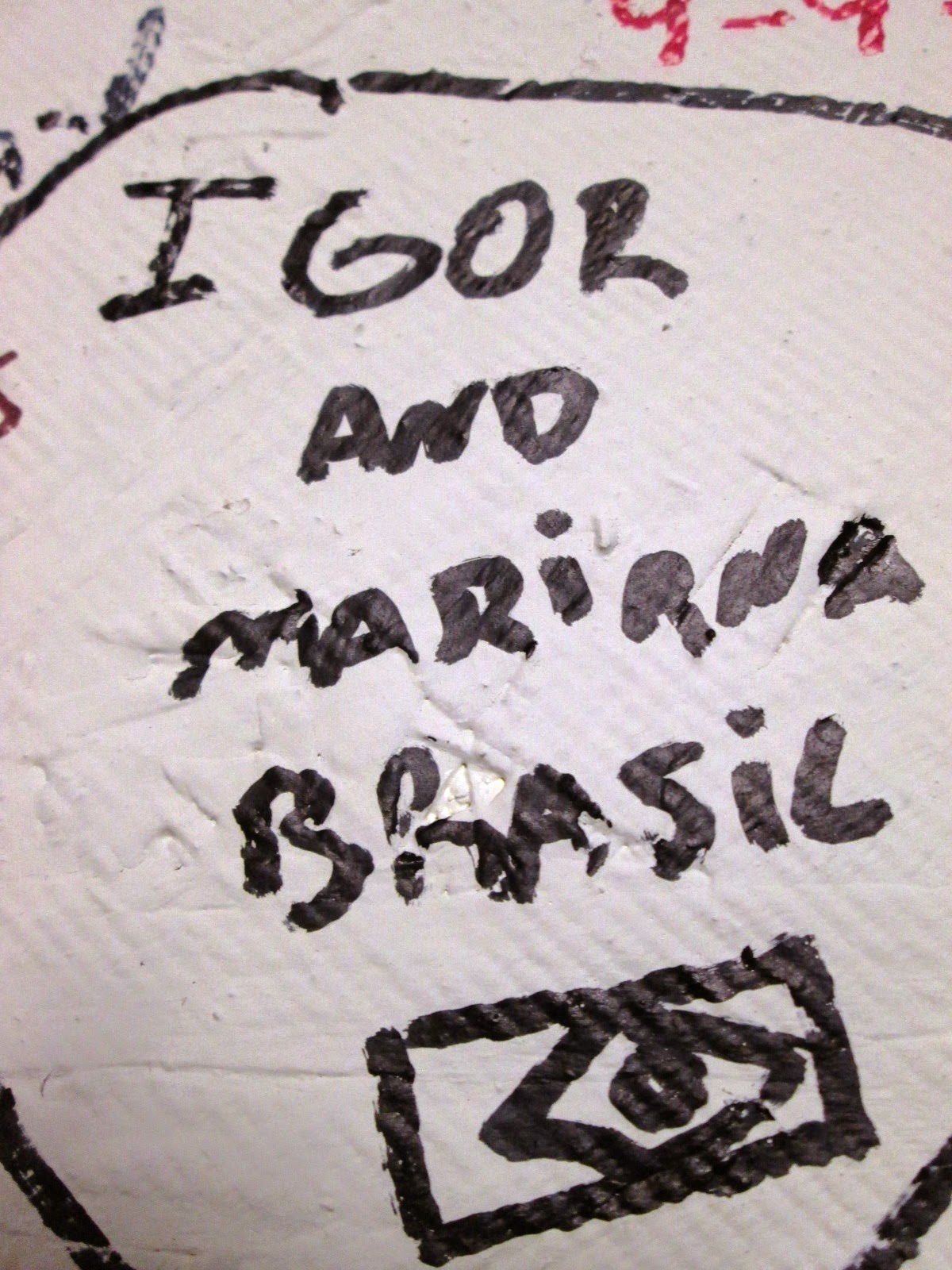 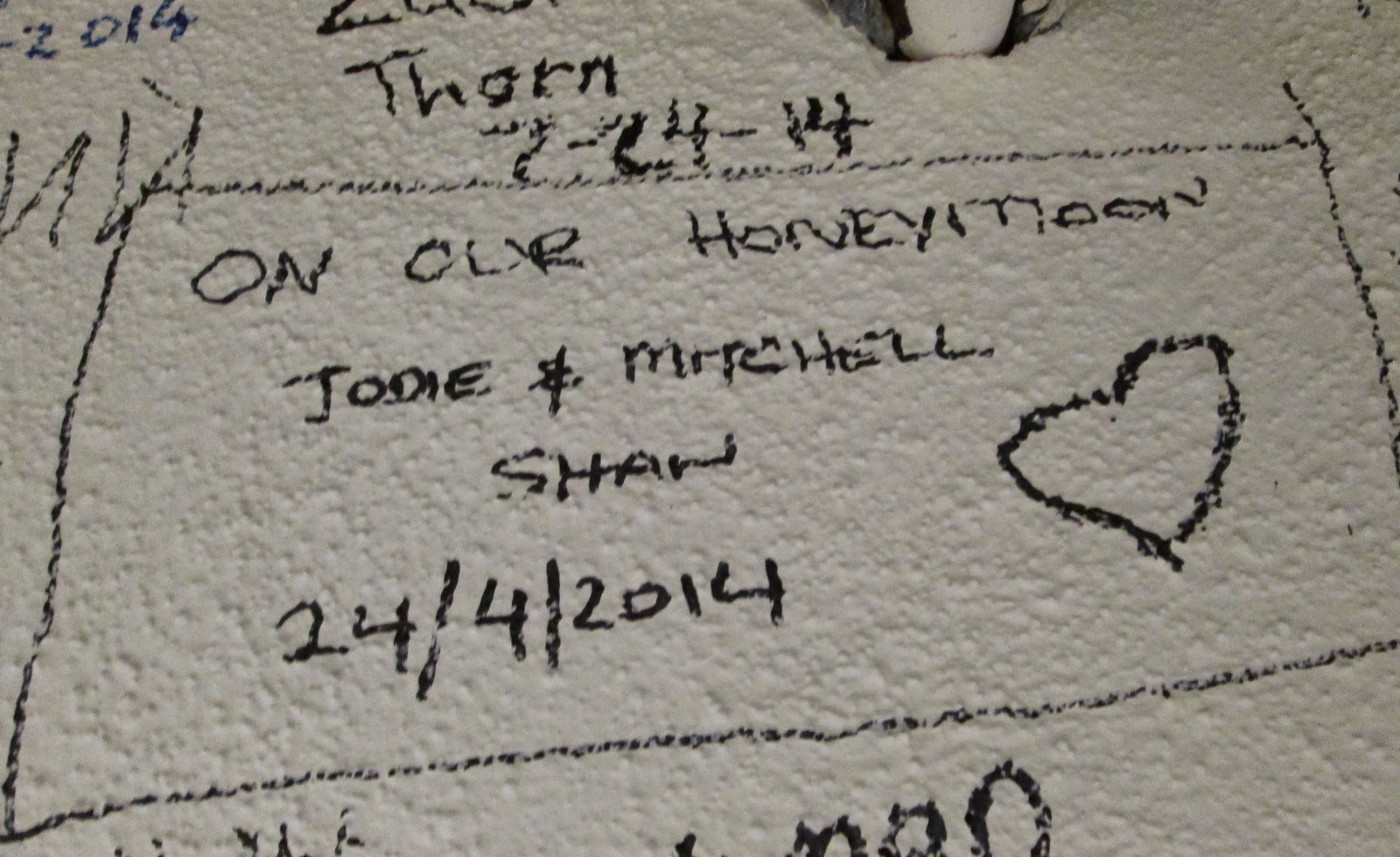 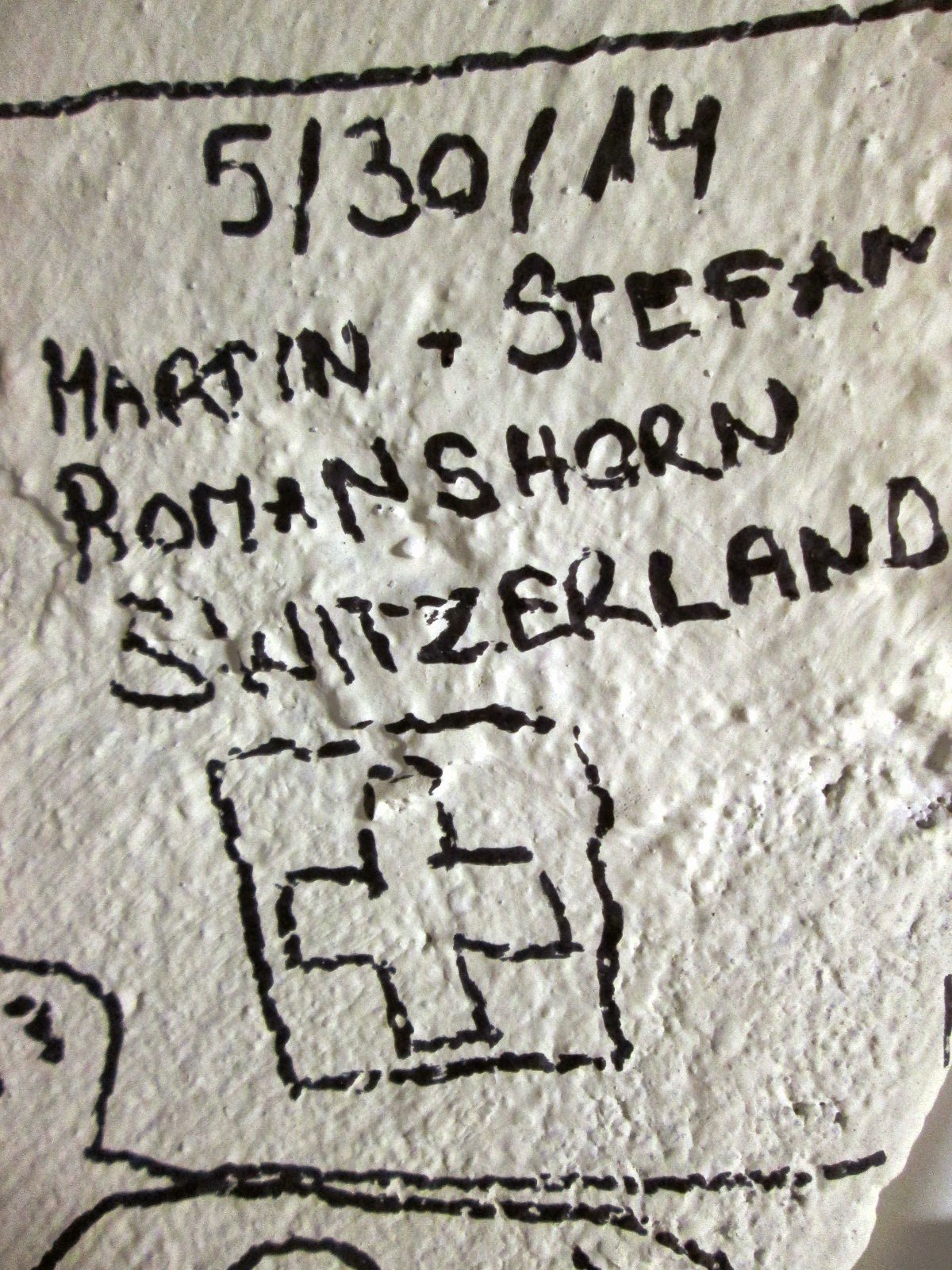 I took a picture of yesterday's page from the guest book because it seemed to be a rather typical one.   Unlike today, the early part of the week was much busier and Robin and Sue were visited by quite a number of travelers from everywhere. . . 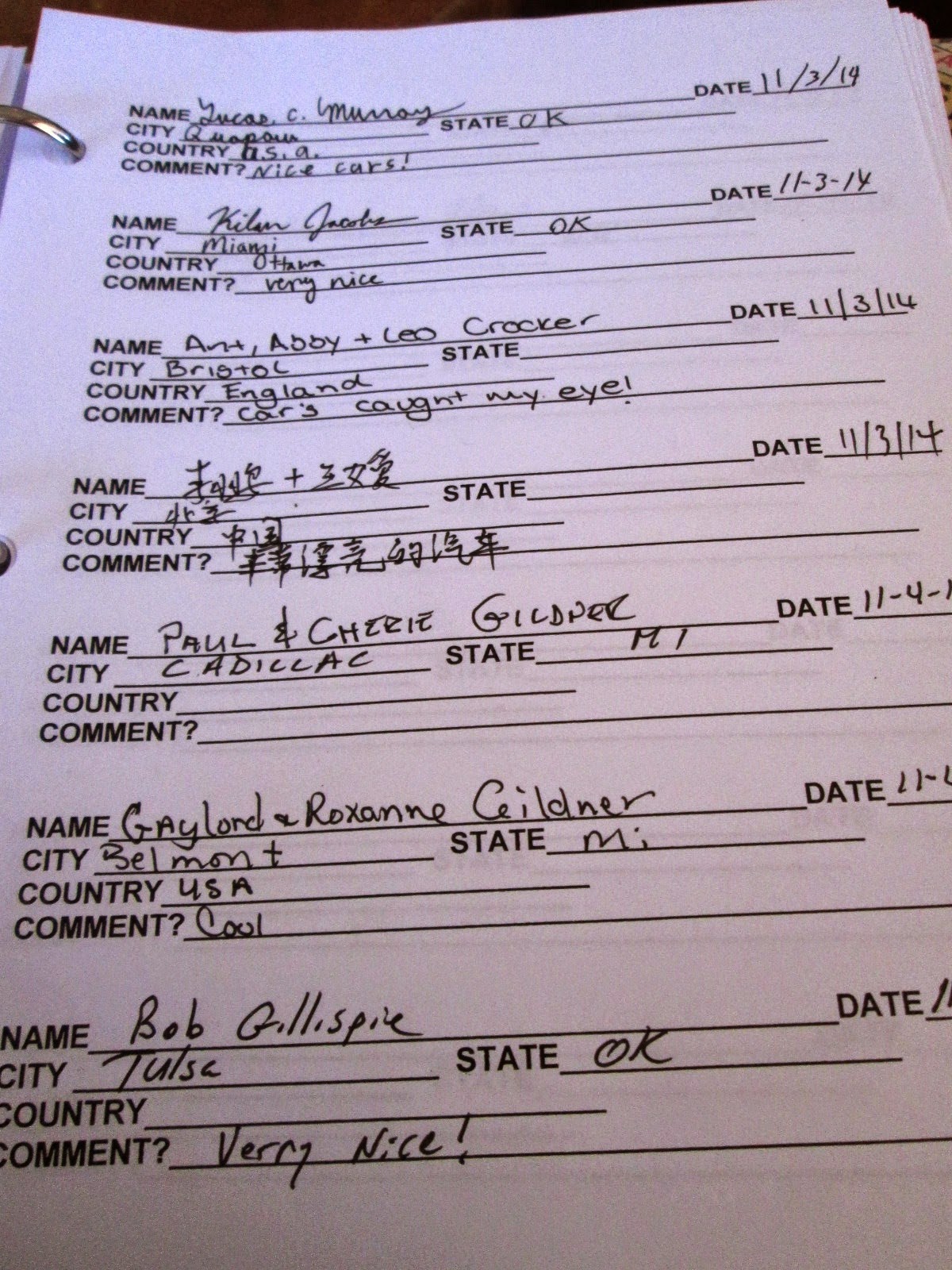 Here, you can see signatures from England and Japan, among others.  Our guest book is a wonderful remembrance of the huge variety of places the world over from which Route 66 travelers come. 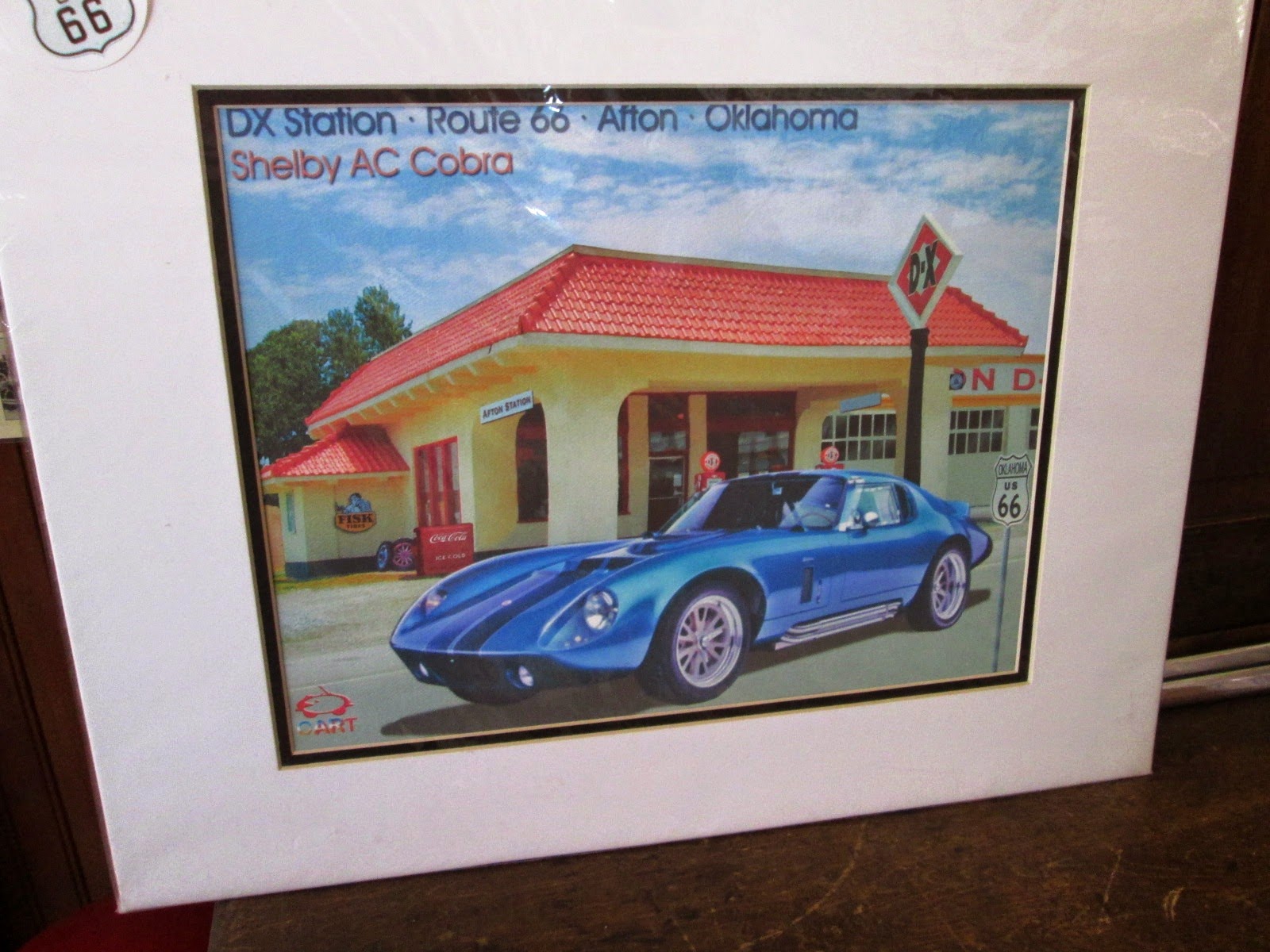 A gentleman named Bob Davis of Car Art Photos made this artwork recently and Tattoo Man brought in a copy for us to display here.  He did it several  years ago and although I already had a copy, I didn't have one large enough to hang.  Bob's work is an interesting combination of photo and fantasy.  He takes a photo of a historic building, then "adapts" it to show how it might have looked in its heyday.  A close look will show the adaptations he made to Afton Station.  The car he placed in front is a gorgeous Shelby AC Cobra.