When we arrived at Afton Station this morning, we discovered that Tripper had found his Fourth of July hat and flag and decided, apparently, to get an early start on his patriotism.  We salute you, Tripper! 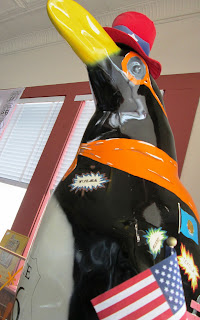 It was a fairly relaxing day at the Station, and Ron M. and I had some free time to catch up on work, reading, and other tasks that don't get done on insane days such as this past Tuesday.  Today, we had an easily-manageable 16 visitors, well spaced to allow us to chat at some length with all who wished to hang out for a while. 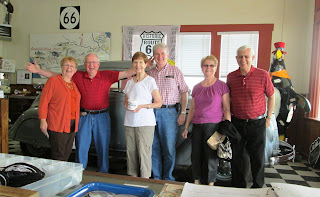 These six friendly folks were the first in the door this morning.  They're long-time good friends and traveling companions from Minneapolis, MN and this time their travels are taking them down Route 66.  They showed such an interest in our Station and in the cars that they made my day even before the day had
officially begun!   Safe travels, you cool people! 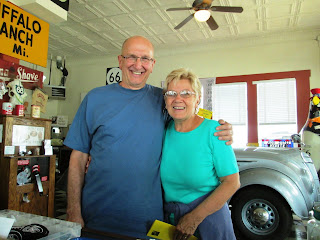 Another enthusiastic and happy couple was the last in the door before closing.  They're from Pittsburgh, PA so I had a chance to reminisce with them about the slightly-less-than-a-year I lived in Pittsburgh in the 70s.  Their travels are taking them down the entire Mother Road from Chicago to L.A. and I predict their smiles will cause them to make lots of new friends along the Route.

Between first and last, we also had visitors from Oshkosh WI, Springfield MO, and Bernice and Tulsa, OK. Additionally, I had a couple of happy midday hours meeting with Fredrea Cook, the lady who is doing such intense and exhausting research about the history of Afton.  As you know, I'm also interested in the past of this little town, so I could have listened to her all day.   Today, I loaned her my entire Afton postcard collection to scan for her website, www.aftonhistory.com.  Fredrea's friend and fellow historian Luretta accompanied her and added many interesting observations to our conversation.

Michael Scruggs' photo show (in our auto showroom) still isn't quite finished, but it should be by this weekend.  Come see these very nice black-and-white images. 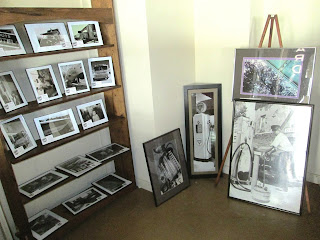