Yesterday was such a wild and crazy day at Afton Station that I was too drained to make a blog post by the time I drove the 85 miles home.  Today, however, I'm refreshed, albeit a little frustrated after a wrestling match with my printer's ink cartridge.  But that has nothing to do with gauchos, does it?

Gaucho, for those who don't know, is the name for cowboys from Argentina.   When this group came to the door of Afton Station late in the afternoon, we found out they were from Argentina, and since they were such handsome, boisterous guys we were reminded of the macho guys who work the pampas of Argentina. 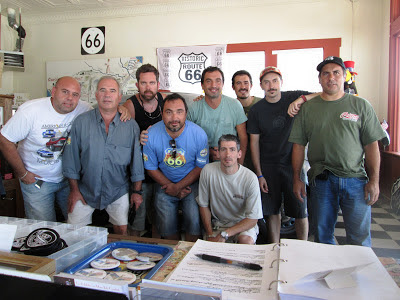 There were 11 of them in all, in two vehicles, and they're doing all of Route 66!   Two are missing from this photo, but I found that it's just as hard to herd a bunch of Argentines as it is to herd people of any nationality when they're busy buying things, using the restroom, and admiring the vintage iron in the back showrooms.
They were from an organized group and both of their vehicles bore this logo. . . 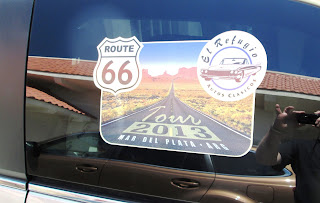 We remarked that we could tell just from their half hour at the Station that they are a fun-loving bunch who are sure to have a ball on the road.

In total, we had 46 visitors today.  Ron M., Tattoo Man, and Betty were all present and accounted for.  The visitors came from Fairland IN, Lee's Summit MO, Charlotte NC, Neosho MO, Mesa AZ, Haydn ID, Post Falls ID, Carthage MO, and Goldby, Sapulpa, Broken Arrow, Bartlesville, and Ketchum, OK.  In addition to the group from Argentina, we also had visitors from Rome, Italy and Limburg, Holland.

Missy, an adorable shih tzu-poodle mix brought along her people from Mesa, AZ and after their stop in Afton they will be proceeding on a long, wonderful trip in their Newell Coach. 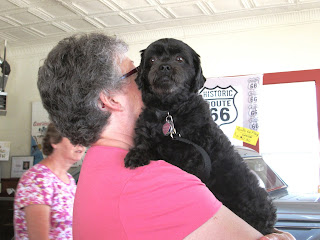 This Dutch couple was at Afton Station two years ago but we were already closed so they just looked in the window.  He told me that they returned to the U.S. this summer specifically to visit the Station. Somehow, I feel he was pulling my leg.  If not, I'm honored! 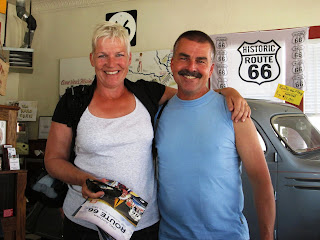 These two Italians from Rome are living temporarily in the U.S. but haven't forgotten their native land, as they listed Rome as their home in our guestbook. 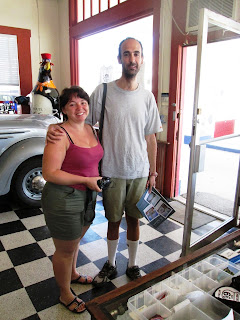 Here are two couples from Lee's Summit, MO who are taking a partial Route 66 trip. We loaded them up with literature to ensure that they won't get lost along the way. 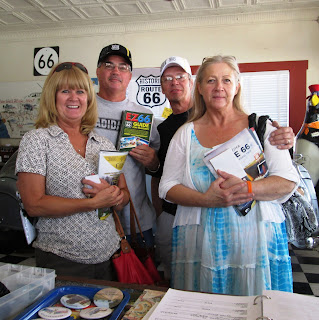 One of the ladies from Idaho showed us photos of her collection of mini cars.  I was astounded when she said she had a Citroen just like ours (there aren't many in the U.S), but she also has a couple of other small cars and a Divco milk truck to die for!

The man from Sapulpa, OK is the president of their car club, and he thought it would be nice to bring the club to Afton on one of their monthly cruises.   I agreed heartily! 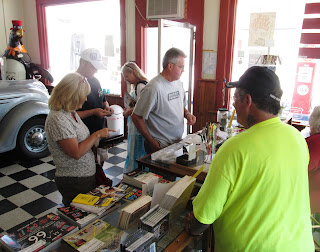 Finally, here's Tattoo chatting with some of our visitors.   It was an exhausting but magnificent day!  Tomorrow, Ron M. and I have to leave Tulsa at 6 a.m. in order to open the doors to the Ride for the Relay which is coming through at 7:45.  It will be a long day, but we always enjoy our annual visit from the Relay folks, a large group of people from all over the country who ride trikes across Route 66 in support of various cancer charities.
Posted by Laurel at 2:08 PM