I realize it's been quite a while since I did a breakfast review here, but since I made the executive decision to close Afton Station for Election Day, I decided to try a new place about which I've heard good things.   I got to my polling place early, thus I had finished voting by about 7:10 a.m. and was ready to enjoy some good grub.

The Freeway Cafe is 4/10 of a mile north of Route 66 on Sheridan Blvd., close enough to make it very convenient for Route 66 travelers, especially since there aren't many places to eat out that way.  When I arrived, it was packed with people... and I mean packed!  But it's large, so there was no wait and there were  a couple of tables vacant.  I was able to seat myself immediately.  I don't know if it's this busy every day or whether it's an Election Day phenomenon.  Lots of the people seemed to know one another.  And, at age 66, I felt like a kid in there!  I suspect that the reasonable prices are what attract senior citizens to the Freeway Cafe, although I would think that the large portions would attract younger people, too.  Today, it was mainly oldsters.

Since I've been slacking off on eating meat lately, I ordered the Pork Chop and Eggs. (It's important to eat a lot of meat if one is on a kidney diet, and frankly I'm getting a little sick of it.)  The extremely friendly, efficient and cheery waitress brought me the eggs, TWO large pork chops, a large bowl of grits, and two pieces of toast, all for $6.49.   Everything was cooked perfectly and tasted great.  I finished only one pork chop, but mostly inhaled the rest of it.  From what I saw on the menu, their French Toast is a specialty, but I wasn't in the mood this morning.  There's always another day. 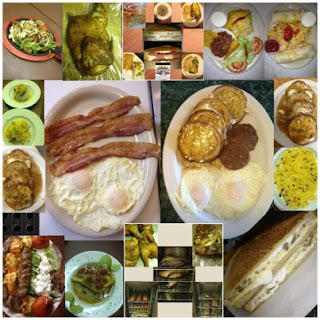 I found this article about the Freeway online just moments ago.  It tells the story a lot better than I have just done.  Check it out, especially the photos of the food.  OMG, I thought I'd had enough for breakfast to fill me up for days, and now I'm hungry again!
http://tulsafood.com/diner/the-freeway-cafe-from-back-when-elvis-sang

I'm really enjoying my first full day off for ages and ages.  Now, what shall I do next?  There are always roads to explore, so perhaps I'll take a little jaunt out to the country.  I guess that's kind of a busman's holiday for somebody who drives 85 miles to work on other days, but you know I'd rather drive than do anything else!  Don't forget to VOTE!
Posted by Laurel at 12:31 PM